Yesterday Carrow Road played host to a double celebration as Norwich City revealed their new kit for the 2012-2013 Season, and revealed a record-breaking sponsorship deal. 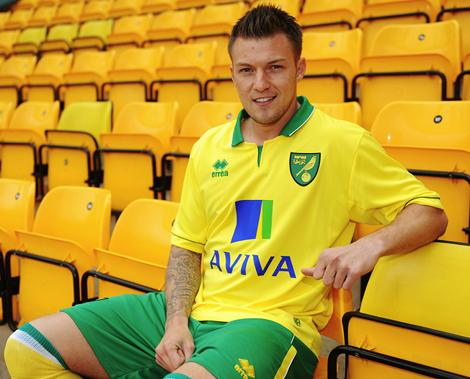 The Canaries latest shirt – made by Italian Brand Errea – features the classic Yellow and Green that we’ve come to love from the Norfolk Club, with a smart polo collar for the likes of Grant Holt, Johnny Howson and Steve Morison to wear at home.

The new Norwich City Home Shirt 2012-13 is set to be given it’s debut this weekend as the Premier League new-boys take on a Blackburn side still clinging to hopes of staying in the top flight for next year.

Paul Lambert has guided his team from back-to-back promotions from League 1 to the Premier League, and currently has his Canaries nesting comfortably in mid-table, with the same points tallied this campaign as veteran top-flighters Fulham and Sunderland. 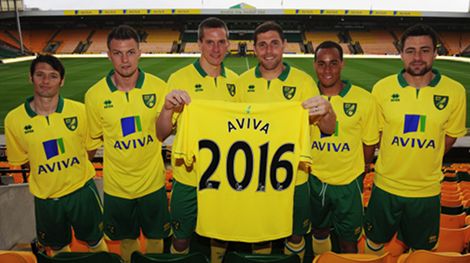 The promise of another season of top-flight exposure is likely the reason Aviva have extended their main shirt sponsor deal with Norwich, becoming their longest-ever term sponsor.

Insurance company Aviva’s new deal will see them remain on the front of both the home and away jerseys at Norwich until 2016, at with point the company will have backed the Carrow Road club for a full 10 years; one of the longest deals in top-tier English football.

Any Canaries out there care to share what they think of the new kit?

And how good is it to see a club have the same sponsor for 10 years?

NORWICH CITY REVEAL NEW KIT AND RECORD SPONSOR DEAL, 7.5 out of 10 based on 31 ratings