Norwich City FC (NCFC) will proudly wear the logo of charity Railway Children on their' shirts for this weekend's Premier League clash with Everton at Carrow Road. 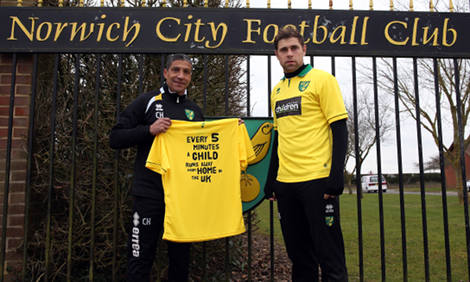 The' Canaries will be lending their support for sponsor Aviva's UK charity partner, to raise' awareness of the fact that one child runs away from home every five minutes in the UK1.

Along with fans, NCFC Director Stephen Fry will show his support via Twitter to help' raise much-needed funds for the charity. For every tweet or retweet posted on Twitter on' match day including the hashtag #1every5, Aviva will donate £1 to Railway Children.

Norwich City Director Stephen Fry commented: Ĺ›Let's all use the power of football' to make the most of Aviva's generosity, and raise a huge wedge of cash for Railway' Children. Come on all you tweeters; let's help raise plenty of money for the lovely people' at Railway Children to continue their great work in supporting young people who feel' alone and are at risk on our streets. I hear there are also signed NCFC shirts up for grabs' so get involved!ĹĄ

Railway Children provide help and support to children under 16 who have run away from' home or are at risk of doing so. They estimate that one child runs away from home every' five minutes in the UK. That's the equivalent of 18 children during a 90 minute football' match. They run away or are forced to leave homes where they suffer poverty, violence,' abuse and neglect.

It will be the second consecutive year that Norwich City have worn Railway Children's' logo on their shirts, with last year's game generating over £10,000 for the cause as well' as delivering priceless recognition of the charity's critical work. Fans will also have the' chance to win one of 18 signed, limited edition shirts worn by the players in a competition' on the Railway Children website after the game

As a father myself, I can't even begin to imagine what it would be like to have your own' child run away from home. To think that 18 children are estimated to run away from' home during Saturday’s game says a great deal. We hope to raise as much awareness' as possible from the activity on the day to help support children who may run away from' home.ĹĄ

As part of their international Street to School programme, Aviva works in partnership with' Railway Children in the UK to raise awareness of this hidden issue, as well as providing' vital funds for the charity to deliver crucial support and services before, during and after' young people run away from home.

Along with donating shirt logos, Aviva will also be dressing the stadium in Railway' Children's colours for the match. This will include programme adverts, LED signage' boards, and media backboards, in an effort to provide as much noise about Railway' Children as possible. NCFC players will also wear the charity logo on their shirts in pre-' match training prior to the match.

Written By
Kyle Elliot
More from Kyle Elliot
Find out what the Spurs playmaker loves about his new boots -...
Read More