Nomis football boots are sold direct from the manufacturer, an approach that cuts out the middle man and reduces their prices. So without the traditional shop to touch and feel the product, Kyle has taken a pair of Nomis Spark football boots on a road test to give you his searingly honest appraisal. 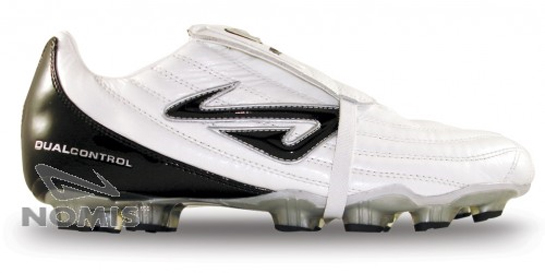 Nomis are a brand that I can honestly say I’d never heard of before I started visiting this site – but in the year or so I’ve been visiting Footy-Boots.com, I’ve been impressed with many things that Nomis have offered as a brand- i.e.; the design principals, the direct distribution and the willingness of the ‘higher-ups’ to talk to websites like our own.

So when the opportunity arose to take a look at the product behind the principal, I jumped at the chance.

Comfort/Fit
Anyone that read my Under Armour play-test will get the impression I’m passionate about the fit of football boots – I’m a firm believer that in this day and age companies should be capable of producing a boot that does what they’ve developed it to do and not rub the skin off your feet.

So, it’s not lightly that I say Nomis have developed an excellent fitting boot – the first outing for the Spark was a 2 hour training session in a glorious British July downpour – which would normally result in at least one blister – so I was massively impressed that Nomis could give a tight, glove-like fit whilst not having any friction between foot and boot.

Durability
The Spark has a nice one-piece leather upper – something that I prefer in a football boot, as it reduces the possibility of separation or tearing between two components.

One concern on the Spark for me is the heel counter – whilst it does the job and adds to the fit, I don’t think it offers much in the way of protection, as it is more or less just a rigid piece of PVC that covers the leather behind the heel.

Feel
The Nomis Spark has an interesting feel to it – if anyone remembers the adidas Supernova, then they’re already thinking along the right lines.

The Sparks have the feel of a Predator – without the signature vamps. The shape of the boot, the amount of studs, right down to the elasticated lace-cover tongue there’s a lot of similarities, not surprising that Nomis’ legacy is closely linked with Adidas.

On the pitch the Spark’s offset and covered lacing gives the instep of the football boot a huge, soft area that’s great for controlling the ball as well as laying off passes. This extends to the forefoot, which has minimal stitching for great contact when pinging in crosses.

Features
The first thing I noticed when actually handling the boots was how ‘sticky’ the upper is. If anyone’s touched the Puma logo on the v1.08’s you’ll know what I mean when I say that the boot is genuinely sticky. Most impressively, after a fortnight of testing I can report that the upper is still as tacky as it was out of the box.

An impressively adhesive upper is all well and good – but does it help with control? Whilst playing in a match, I honestly didn’t notice it adding much in the way of ‘extra’ control, so it might just be a gimmick – that said, if you asked me which would give better control; this upper or that of, say, the f50 or Vapor I’d say the Spark has the advantage.

Another of the touted features is the ‘NoMud’ soleplate – which is coated in a substance that stops mud clinging during play, thus keeping the boot light.

To put this to the test I wore a Nike football boot on one foot and the Nomis Spark on the other and did some simple sprint-with-the-ball exercises across the penalty area. 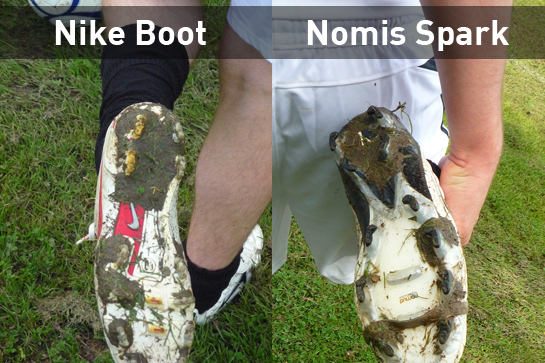 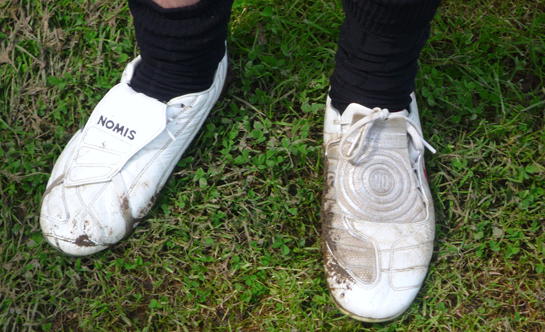 As you can see from the results there is certainly less mud on the Nomis boot than the Nike, especially in the heel. While, in my opinion, I don’t think there’s a big enough difference between the boots to call NoMud a rousing success; there is definitely a difference and perhaps it’ll be worth its salt in the boggy December months.

Conclusion
Given that Nomis are leaning toward direct distribution you’ll only find these boots for £95.00, which puts them right in the bracket of football boots like the Adipure II and the newly released Air Legend III.

So, if you’re after a football boot that’s a little bit different to what everyone else will be wearing this season, or you’ve never been a big subscriber to additions like the Concave, T90 Shot Shield or speed gimmicks like the Lotto Zhero G, or maybe you’re sick of boots promising a tight fit and then getting blisters for the first 2 weeks, it’s worth bearing Nomis in mind.

Written By
Felipe
More from Felipe
The New Spain Shirts - home and away,
Read More