Nomis football boot wearer Harry Kewell may be on the verge of signing up to American sportswear brand Nike.

Australian winger Kewell has been the figurehead of Nomis’ campaign to increase its share in the football boot market, but has recently been pictured wearing Nike Air Legend’s whilst playing for Liverpool, prompting speculation that his boot deal with Nomis has expired. The loss of such a high profile endorsee would be a huge blow for Nomis, especially as their only other featured endorsee in English football over the past few years is veteran Peter Beagrie, a now retired former winger, who wore the Nomis Glove during his footballing swansong at Scunthorpe United and Grimsby Town. 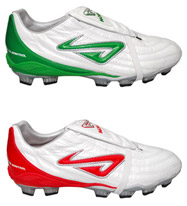 Kewell famously ditched his lucrative football boot deal with Adidas, in favour of wearing Nomis boots for free. The Liverpool winger famously wore them for the first time in Liverpool’s dramatic European Cup win against AC Milan in Istanbul in 2005. Kewell has recently been wearing the Nomis Spark MS, a football boot made of K-leather, with a two density outsole offering improved comfort, flexibility and stability. The Spark MS is ideal for a quick player like Kewell as it offers a new foot position by elevating the heel slightly, putting your foot in a better position for sprinting. The injury prone Australian will also have benefited from the raised heel reducing the impact force on his heel, helping to reduce the likelihood of heel injuries.

A spokesman for Nike said: “Harry Kewell is free to choose which football boots he wants to wear. He is not a Nike contracted athlete but has been wearing Nike football boots out of choice.”