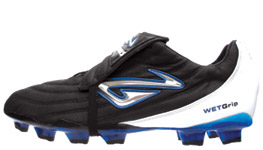 So why would Harry do that?

Well, Nomis have launched a video that shows their football boots grip on a football. The video shows a comparison against another football boot and the performance, although only demonstrated in a basic test, is remarkable. The Nomis football boot really looks to have a great grip on the ball. The leather is tested dry and wet and once wet the football boots really perform.

Written By
Felipe
More from Felipe
We invited the Footy Boots readers to submit their best Nike ID...
Read More