Nomis is based in Brisbane, Queensland, on Australia’s east coast, although the football boot specialist is now distributing its products throughout Germany, Scandinavia, Brazil and the UK in a total of 1200 retail outlets. Nomis is on course to sell 75,000 pairs of football boots this financial year. Next year’s target is 200,000. Indeed, as we previously mentioned on Footy Boots, Nomis’ new Futspeed range is to be released in the UK next April. 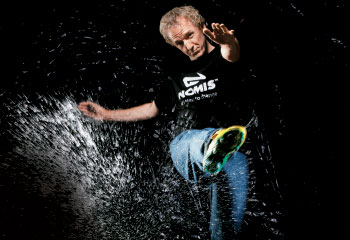 Nomis is probably most famous for having Harry Kewell as one of its contracted players. Australian Kewell famously ditched his lucrative football boot deal with Adidas, in favour of wearing Nomis football boots for free. The Liverpool winger famously wore them for the first time in Liverpool’s dramatic European Cup win against AC Milan in Istanbul in 2005. Kewell currently wears the Nomis Spark, a football boot made of K-leather, with a two density outsole offering improved comfort, flexibility and stability.

Skirrow who has been involved in the football boot business since joining Adidas at the age of 17, says it is, “the thrill of the challenge” that drives him to pursue better football boot technology. He says he loves the challenge even more today than he did as a teenager, as the development of new techniques and advanced materials provides more opportunities for diversification.

By the age of 29 he was Adidas’s senior vice-president of global football, overseeing the company’s sponsorship of 70 of the world’s leading teams. One of his greatest achievements was to develop the world’s most successful football boot, the Adidas Predator, alongside Craig Johnston.

Nomis’ goal is to create the most comfortable football boots possible for footballers, while at the same time boosting performance. Skirrow states: “Our aim is to be known as the football boot company. Not an elitist boot. One that is good for Harry Kewell and just as good for my son and your son.”

Nomis football boots retail for between £40 and £120, positioning them at the mid to top end of the football boot market.

The last few years have seen the introduction of increasingly lighter football boots; players often appearing to be running around the pitch in a pair of runners spikes! However the recent spate of metatarsal related foot injuries has highlighted a need for a more protective and supportive style of football boot.

Skirrow agrees that the weight of the football boot should be a consideration, though he cautions that it should not be the main feature. He believes light football boots tend to lack the necessary heel and midsole strength that the foot needs to support itself, which could lead to difficulties or even injury for players.

Written By
Felipe
More from Felipe
The Premier League has 11 players short-listed for the Ballon d'Or, more...
Read More