Whilst there was no shortage of top-tier competition at the tournament, the ‘Battle of the Brands’ this year seemed to be something of a two-horse race between adidas and Nike.

Though the final was dominated by Three-Stripe’d kits and the Brazuca’s incredible social rise, Nike had something of the last laugh as Mario Gotze brought the ball down on his chest and slotted home a goal worthy of winning a World Cup final in his new Nike Magista Obras.

But even though it seems like a lifetime ago, Nike had something of a head start this year; the Risk Everything trilogy of films racked up hundreds of millions of Youtube views before the opening game. 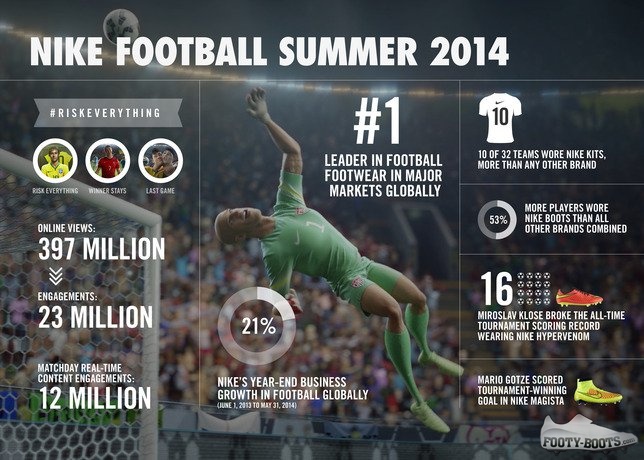 Even on the pitch, Nike started the tournament with 10 sponsored teams, while 53 percent of all players selected for their squads wore Nike boots, more than for all other brands combined.

Throughout the competition, Nike-sponsored players scored 76 goals, including the winner in the final from German striker Mario Gotze, and the goal that took his fellow striker Miroslav Klose to all-time tournament goalscorer, breaking the cumulative record previously held by Ronaldo of Brasil.

All in all, an impressive showing from the Swoosh this summer, which will no doubt set up an exciting season ahead.

Written By
Kyle Elliot
More from Kyle Elliot
Who's set to come out on top when Spain's top two teams...
Read More