People who play 5-a-side often take the small-sided game as seriously as their 11-a-side counterparts, so it™s surprising that there™s been so few specialist 5-a-side trainers make it to market. 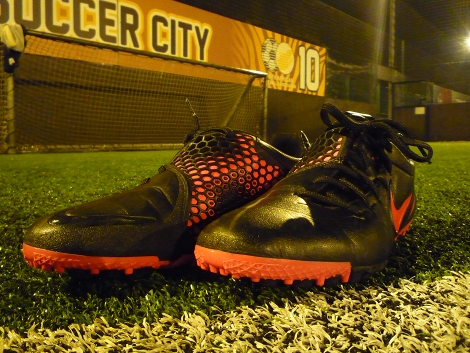 It™s not like the usage patterns are specialist when it comes to games in ˜the cage™ either “ in fact – the similarities are plentiful when compared to an full sized game; players play for anywhere between 45 and 90 minutes a week, the ball is usually the same size and the players involved can be as dedicated as you™ll find on any grass pitch.

So, up steps Nike with the Bomba Finale “ a shoe for the small sided game with a full-blown price tag, designed for those of you that only play 5-a-side but give it everything and want the best gear.

Does it fill a gap in the market? Or just leave a big gap in your wallet? Let™s find out. 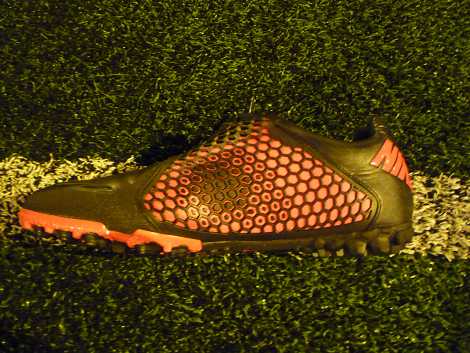 Looking at the Bomba Finale, you™ll probably draw the most comparisons to the T90 Laser III, and the fit is much the same too.

The side offset lacing is nice and snug, pulling the boot plenty tight to your feet allowing you to get your foot nice and close to that substantial shotshield that really sets the Bomba Finale apart from the crowd.

However, the Bomba Finale is a little too similar to the Laser III, sharing the single fault I have with the fit of the latest in the T90 range.

Due to the nature of the material used, the boot creases in a very linear manner across the toes “ rather than bending with the curvature of the foot like a leather boot would, it creases in more-or-less a straight line.

This causes the Bomba Finale to crease in a straight line along the toes, which bends the crease of the boot into your little toe. The first couple of times you wear them, this will almost certainly cause you a little discomfort “ it™s nothing too distracting or painful “ but if you™re paying top dollar for your 5s shoes, it™s nice to know that this can happen. 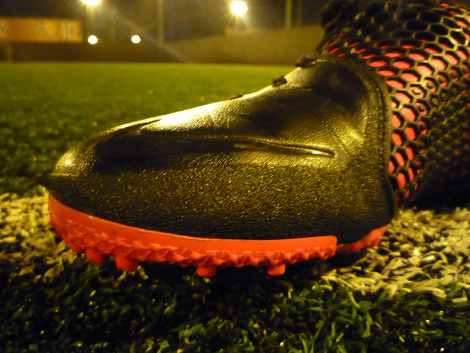 That said, all that™s negative about the Bomba Finale™s material in terms of fit is a positive for it™s durability.

The tough, slightly plastic-y upper feels durable and well constructed, meaning it™s unlikely to disintegrate when face with the brutal friction most 5s shoes are faced with on a week-by-week basis.

Speaking of friction-resistance, around the sole of the shoe, there™s some ultra-tough, almost sandpaper feeling plastic that is also designed to withstand serious grief from the turf.

This was hugely important to me, as my Puma v5.08 astro™s that I break out for 5™s lasted all of 3 matches as the micro-canvas upper was swiftly devoured by the highly abrasive turf! 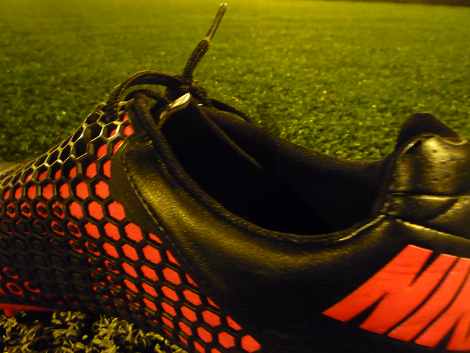 I don™t know whether this really counts as durability or not, but it something that deserves a mention “ Nike have engineered a special collar into the ankle of the Bomba Finale that™s designed to keep out all that pesky rubber crumb.

The good news is that™s there™s definitely a reduction of those weird black blobs on your socks after a game “ but you can tell that it™s definitely a first attempt from Nike as it™s not 100% successful. It™s a tangible improvement, but there™s work to do if Nike want to make this a real feature of the boot. 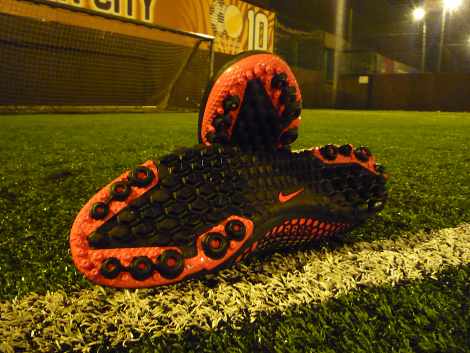 The Bomba Finale overall, has a good feel on the ball “ and I™m deliberately using a slightly underwhelming adjective there as it™s more than a little predictable.

Looking at the boot, you™ll know that it™s not going to give the ball that sweet caress that your 4 year old Sambas do, and you™re not meant to wrap your feet around the ball like you can in your battered Tiempos.

Instead, you rely on the grippiness of the sole to get your foot on the ball, and after a couple of games you™ll get used to how the shotshield feels between your foot and the ball.

But you can kind of guess that from the moment you look at the Bomba Finale “ it gets that job done adequately so that it can focus on what it™s meant to “ shooting and passing.

What you can™t tell from pictures of the Bomba is the existence of a tiny, rock-solid ramp that covers the top lace eyelet. This is strategically placed so that when your whole body is over the ball, and you™re striking the ball with the majority of the surface available on your foot, you™re going to feel the extra ˜oomph™ and keep the ball on target.

If I was to liken it to anything, it would have to be a smaller version of Concave™s oft-maligned SweetSpot or the 3-D Power Shooting Technology present in the upper of the Puma PowerCat C1.10. 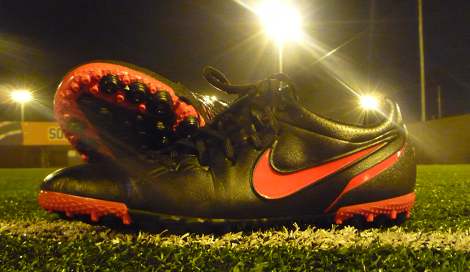 There’s some kinks, for sure – but it’s a bold first step for Nike to bringing the Football Boots design ethos to the smaller sided game. If you can look past the equally football-boots-sized price tag, then there’s a dynamite 5’s shoe here that’s packed full of really thoughtful and innovative features from the big N.

In my honest opinion, I think these nifty pieces of design almost/just about justify that lofty price tag. After you break them in a little bit (if it weren’t for that awkward toe this wouldn’t be an issue!), they’ve got great contact when striking, top notch specialist traction and a ‘decent’ enough touch on the ball. Team this with nice little pieces of design like the anti-rubber crumb ankle and arguably they are the single best 5-a-side shoe on the market.

If you take your small-sided game seriously, and maybe don’t buy football boots or expensive balls like the T90 Tracer, a pair of Bomba Finales will probably be a great investment for at least two years of weekly 5’s play – I definitely think they’re durable enough to stand the test of time.

But if you’re more of a casual player, who just plays when their mates hire a court or you fill in for the odd league game – these are not the boots you’re looking for;  you’re not going to feel the best aspects of the boot working for you week-in, week-out and the price doesn’t justify that sort of irregular usage. You’d be much better spending a quarter of the price and buying a pair of Astroturf sibling boots.