“So after my morning cup of tea and my daily Footy Boots check, I stumbled across a competition worth entering. “THE NEXT CHAPTER – NIKE FOOTBALL COMPETITION”

“We’ll be attending their first event on Wednesday evening and you could be joining for the following day’s activity too. We’ve got ten tickets to give away to Footy Boots fans who want to be part of this exciting launch.

What a chance to experience firsthand the technology from the people that actually develop the boots that I have loved since owning a pair of the Tiempo‘s with the long tongue (the one’s that Cantona used to wear!).

So, after instantly knowing the answer to the question (What is the connection between Nike’s current poster boy Cristiano Ronaldo and the player who debuted the first ever pair of Mercurial boots in a professional game?) ' I had a crack with the answer…….they share the same name, and got back to work.

At 16:12 (and several cups of tea later) I dropped my new cup of tea after an e-mail landed on my desktop from Andy Kay…saying I’d won!! Not only that, later on he offered me the chance to bring a friend.

The next morning Mark (The friend) and I set off on our Write History journey to a secret location in London; Battersea Powerstation. What we didn’t expect to find was a Nike writing their own history; they had been allowed to design and build a bespoke area within the Powerstation for the very first time. 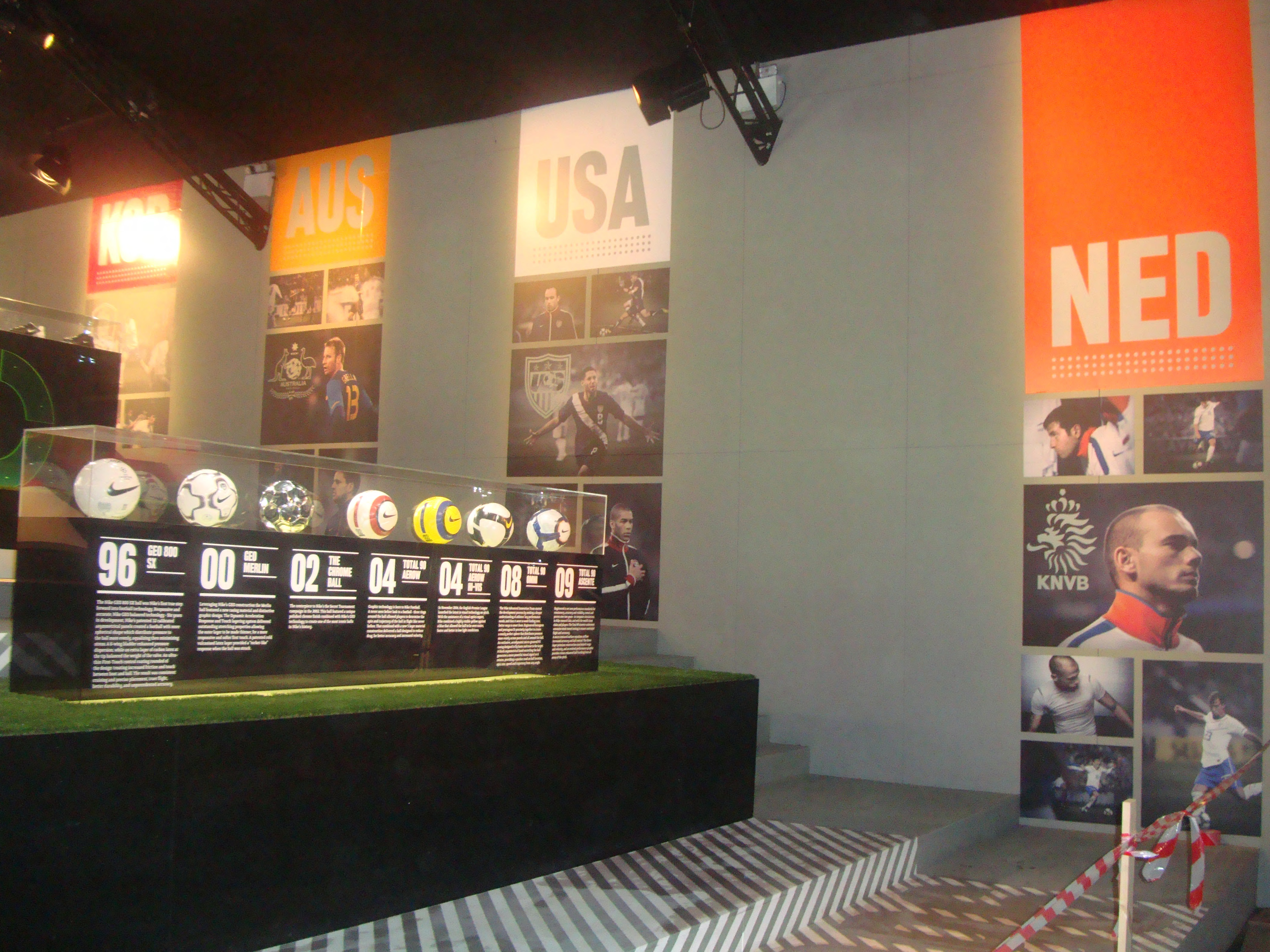 Directed to the secret entrance, led down a long tunnel lit by fluorescent lighting and greeted by the classic Nike Parklife advert on a giant screen, the excitement crept in. After seeing the very first manufactured football boot with a swoosh from 1971 standing proudly on guard with its own clone of Dolph Lundgren (Rocky IV) protecting it, the seriousness of the event became apparent.

Simon from Nike could not have been more hospitable and probably as excited as we were, a genuine Nike and football fan! After all the introductions, security briefing and the fact we were about to see things the global press had not even seen…no pressure, we were taken through to the impossibly stylish main arena.

It really was a sight to behold and the fact that Cristiano Ronaldo himself' had walked this path not 24hrs ago, really made the atmosphere electric. (Ha!' Two 28 year old men buzzing from someone they hadn’t even seen! It just goes to show the man’s status in the game!)

Our first stop on' our mini tour' was at 5' international tracksuit tops' that the nations displayed, would adorn at this year’s world cup.

We then moved on while avoiding the meticulous cleaning and redecorating that was taking place for the evening’s big launch. (You could have thrown a few Brazilian players in there and you would have had a great Nike Joga TV advert!!)

In the heart of the arena was the beautifully displayed Brazilian display. 6 yellow jerseys from the first, to the newest Nike made jerseys for the most successful national team in history.'  The one at the back was even signed by Ronaldo!! I bet most boys and men alike would nod when we say ‘After watching France 98, did you, or did you not,' try at some point to do the drag and step over?’ It should be in the Soccer am ‘Tekkers’ hall of fame! 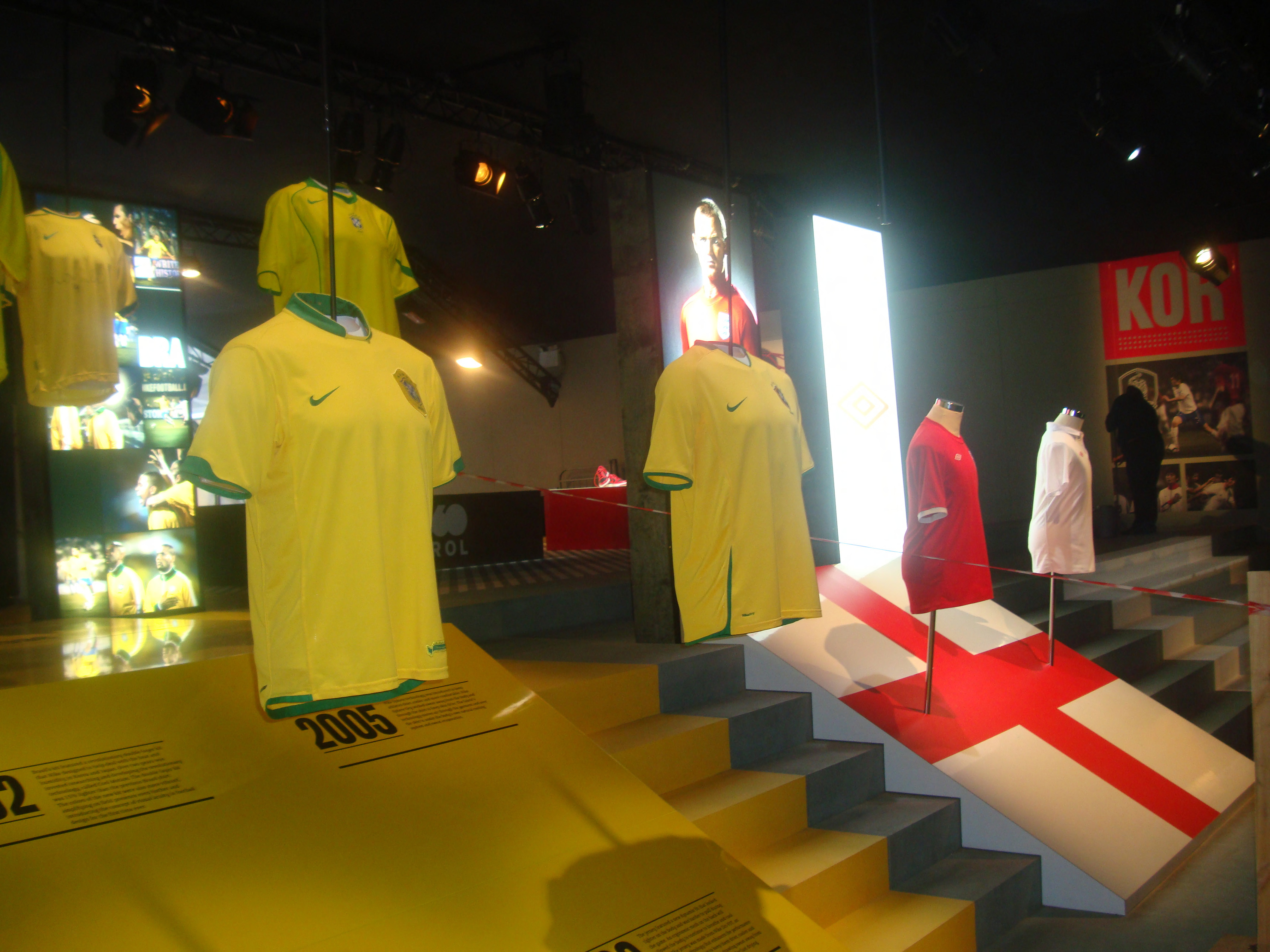 Next to Brazil, were the undisputed best team in the world (well, best at causing angst among their fans!) England! The very stylish 66 inspired jerseys really emitted a pride that was even' plain to see in the eyes of' Wayne Rooney, who was the obvious choice to model the gorgeous red away shirt on the placard behind them. Wasn’t it out of place at a Nike event though? If you didn’t know like we didn’t, Nike own Umbro.

If you like football boots like we do, especially Nike, (Ed: Ayman’s fascination is a bit weird…) then you would have loved it here.

Display upon display of the different models of boots from the first to the most current release of that specific range.

T90 Laser, Tiempo Legends, CTR360 Maestri…and then the most poignant boot, the Mercurial range. From the first Nike Mercurial 98 boot which we all remember' (The matt and gloss black' boot with white piping' worn by Ronaldo)' to' the Mercurial Vapour, the Vapour Superfly and then finally, the pinnacle. The Mercurial Vapour' Superfly' II. 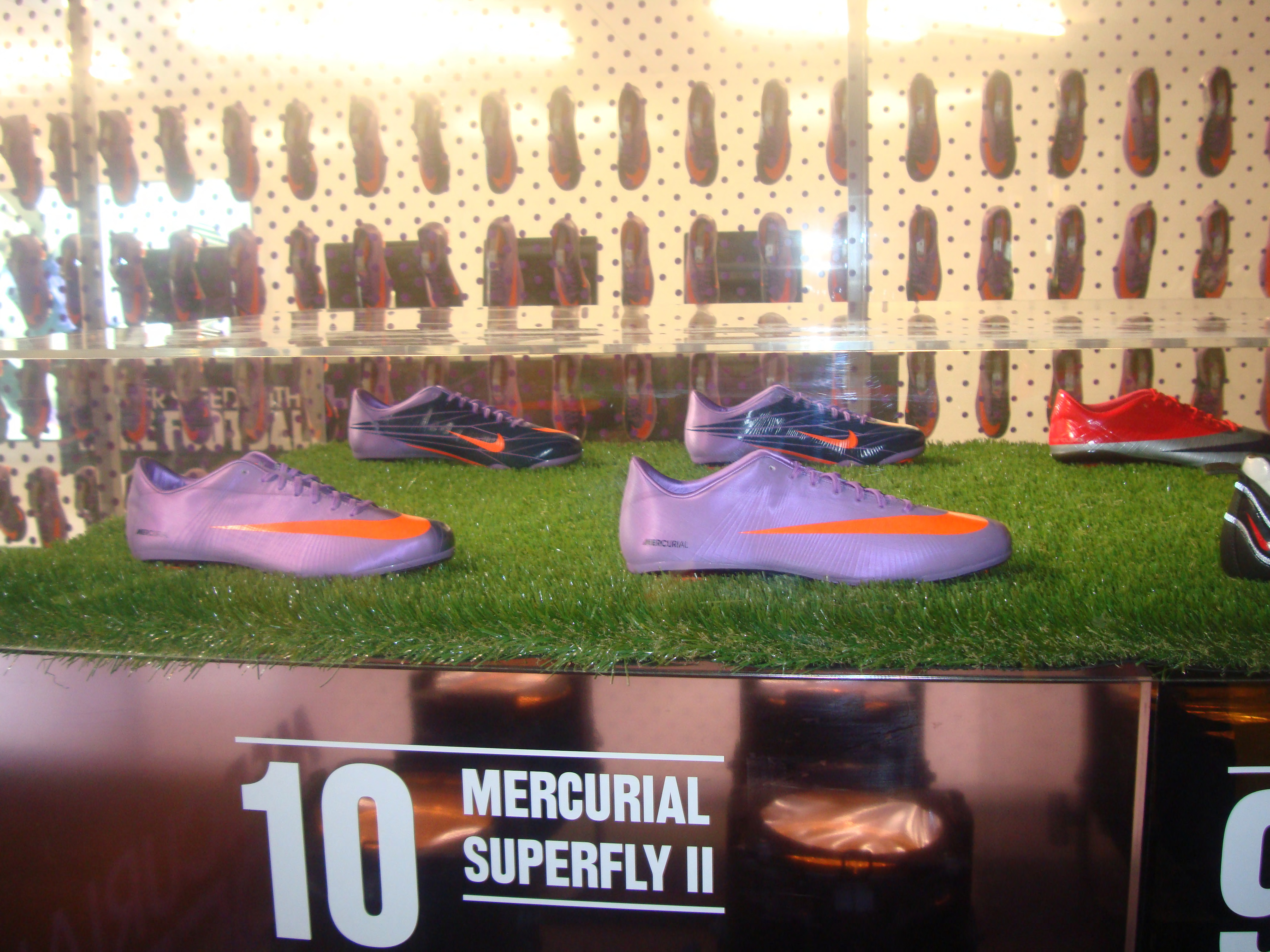 Stripped of its colour, it really was a beautiful looking boot, but that colour! Andy Caine would soon be on hand to tell us why…

We were led to an ultra modern office/bootroom that was a work of art inside, as well as out. Walking into the arena an hour ago, we had noticed on that on the left hand side, was a wall of hundreds of the new Mecurial Superfly II boots which cleverly made the seamless transition into part of the main' arena display with the masterful use of lighting.

Inside, was even better. Brand new Apple Macs were available to use to look at' the latest ‘Write History’ projects and all things Nike and Technical drawings were displayed in such a way that you actually felt like you had been teleported into the Oregon design studios.

After sitting down, we were introduced to the main man Andy Caine, The design director of Nike, the man who had made the Superfly II boot a reality. Without him, there wouldn’t be a Superfly II, a Tiempo, a T90 Laser or a CTR360. This man was the head honcho of' R&D AND designing those boots. What an honour, what an opportunity to find out why they were that colour!! (Ed: Which you can read more on in our interview with Andy) 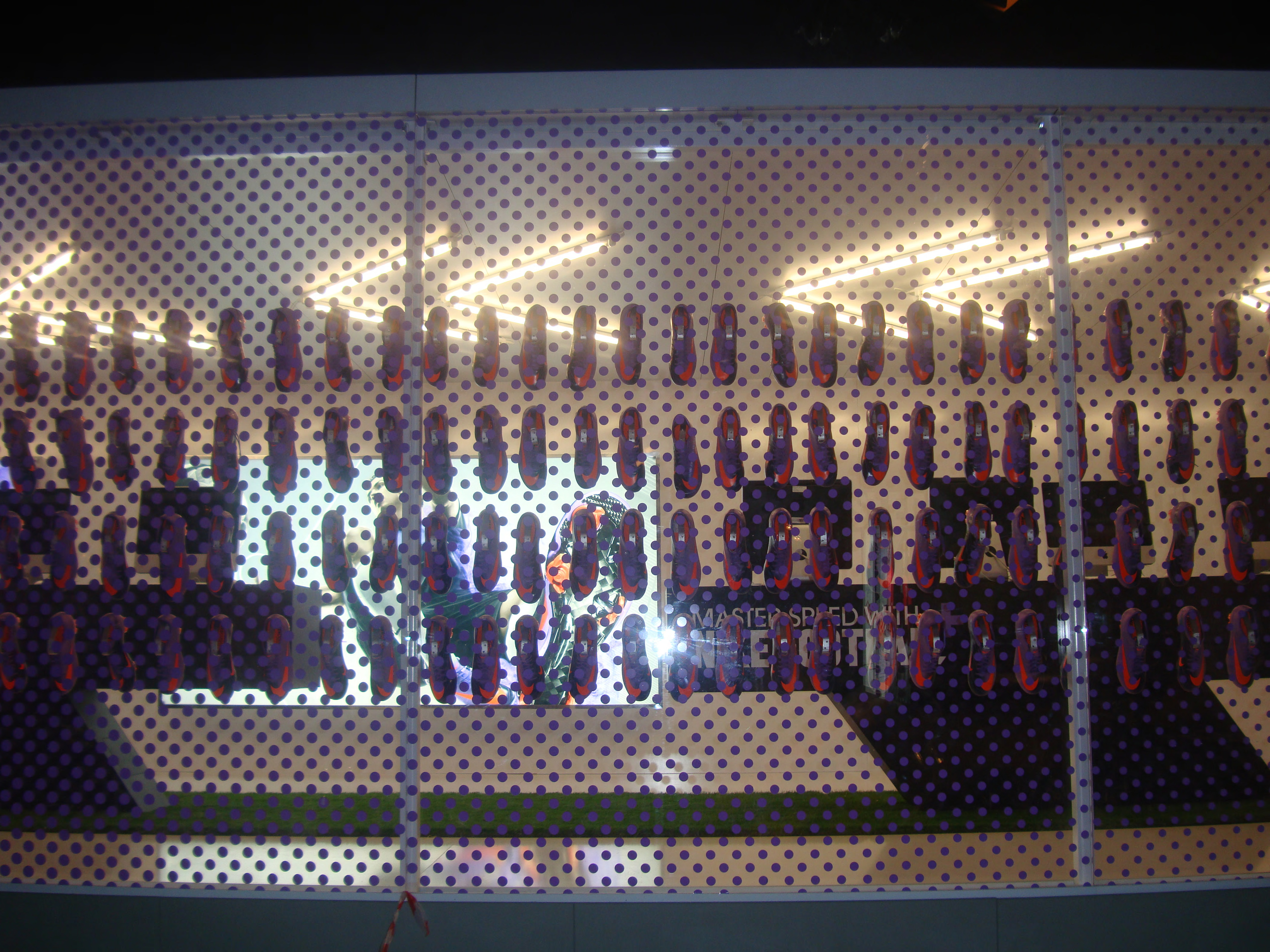 We also met Rudy Manival, Marketing Director and best mates with Didier Drogba. He gave a great insight into Drogba’s and other players help in developing the new boots. Especially in the design and positioning of the studs, we were all given a boot to inspect, play with, and take apart.

The meeting concluded, we handed in all our phones and cameras and led to view all the new World Cup kits which the global press had not even seen!! It really was amazing! The way they were displayed so immaculately and the security that followed made us aware just how important this was!

We took our pictures, had a final walk around and left what we can only explain as one of the great experiences! The way we were treated whilst with Nike was really something, very informative and very down to earth.

Thanks so much to Footy Boots, Simon Wainwright, Andy Caine and Rudy Manival. We had a brilliant day!

Written By
Felipe
More from Felipe
It's a one man show for Arsenal as Andrey Arshavin dents Liverpool's...
Read More