Ahead of this weekend’s clash with Stoke City, some of Arsenal’s top players took to training today wearing the new Nike Mercurial Vapor VIII football boots. 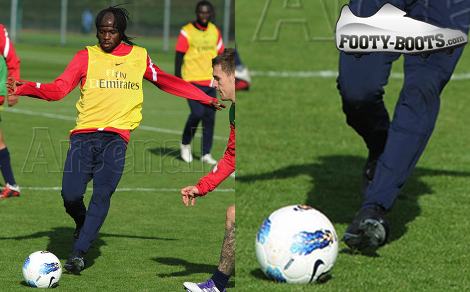 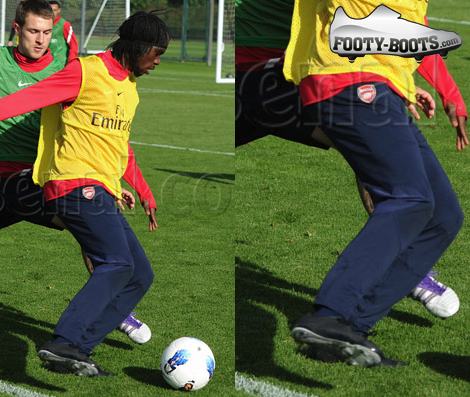 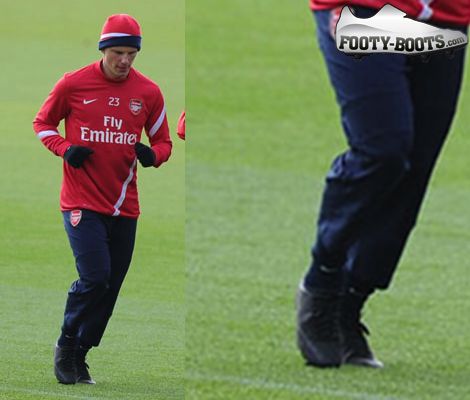 We saw the blacked-out' Nike Mercurial Vapor VIII during the international break on the feet of Real Madrid mega-star Cristiano Ronaldo, but it seems Nike are after even more feedback as they took their new speed football boots to London Colney.

The Gervinho and Andre Arshavin were the two players who swapped out their usual football boots for the super-light new Nike cleats, both spending their training session in black-out models of the new Vapor.

As we noted with Ronaldo earlier this month, the one thing we’re impressed with when it comes to the' Nike Mercurial Vapor VIII is the shape!

They truly look like running shoes, with very little substance to them besides the upper; we can’t wait to find out the specs come Spring next year.

For anyone after the nitty-gritty, geeky stuff – we can tell straight away that the Carbon Fibre on the sole of the current Superfly III has been ditched in favour of something that looks like a glass-fibre composite – perhaps to reduce the cost of the range of this notoriously-pricey range of football boots?

Either way, we’ll find out when the' Nike Mercurial Vapor VIII launches next year!

Written By
Ramsay
More from Ramsay
The FA has turned to a Robot to promote their Respect campaign,...
Read More