Nike’s latest PR stunt is completely ‘off the wall’!

Sorry, about the joke in the title, I can only apologise. 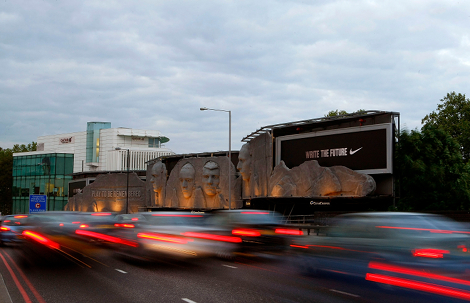 Nike has unveiled a giant rock billboard of America™s Mount Rushmore in London, featuring the faces of Wayne Rooney, Rio Ferdinand, Theo Walcott and James Milner in place of the traditional four presidents of the United States, as the footballers prepare for the summer.

Located on the Cromwell Road in West London, the largest advertising site in the UK, the four famous football faces replace the original US founding fathers of George Washington, Thomas Jefferson, Theodore Roosevelt and Abraham Lincoln in the iconic Mount Rushmore sculpture. 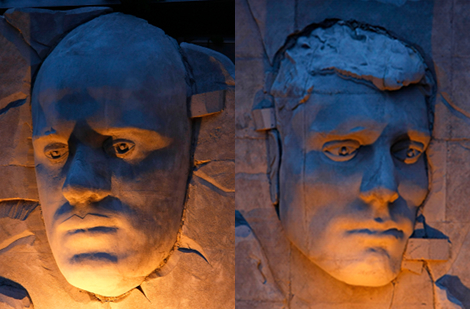 The site stretches an amazing 75 metres long is 16 metres high and two metres deep – making it the biggest advert in the UK “ and is predicted to be seen around six million times in the lead up to the opening fixture.  Each players face measures 4 metres high alone.

The rock sculpture billboard idea began five months ago when each footballer had their face electronically scanned to produce a lifelike reproduction of their features – with each face then being perfected in intricate detail by a team of dedicated craftsmen and sculptors in a secret location Essex. 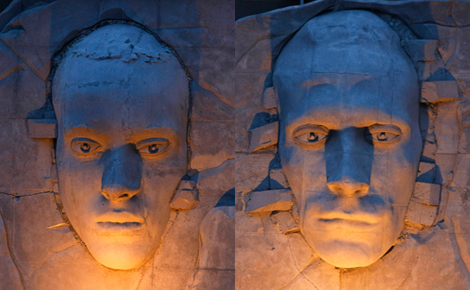 And the four giant faces, each weighing 250 kilos, were transported on lorries at the end of last week, and installed using cherry pickers on the site in West London.

The build at the Cromwell Road site took over five days to complete and will be in position from today until Sunday 20th June.

The words ˜PLAY TO BE REMEMBERED™ have been carved into the rock formation, inspiring the players to give history-making performances on the pitch and follows on from the launch of Nike™s ˜Write The Future™ TV advert last week.

The billboard will serve as an ad for the Elite Series Boots that all of the stars will be wearing at the World Cup this summer.

With the exception of Theo Walcott – who was due to play in the Nike Mercurial Vapor II Elite, until he was surprisingly excluded from the England squad, on the same day the giant billboard was revealed.

It all sounds mighty impressive – but have you actually seen it? Leave us a comment and let us know what you think!

Written By
Kyle Elliot
More from Kyle Elliot
Some of Africa's biggest stars turn out for a testimonial in Aspero...
Read More