Whilst Twitter has minimised the gap between' millionaire' footballers and fans like never before, brands like Nike and adidas must be tearing their hair out over the frequency at which players are giving away glimpses of boots that are still under an embargo. 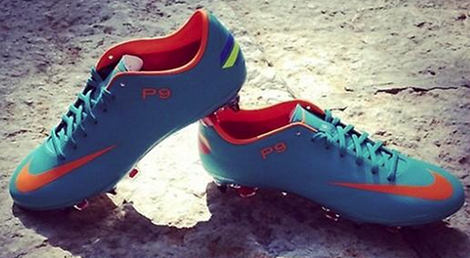 From Charlie Adam, who was the first player to reveal the adidas adiPower Predator launch colourway back in April 2011 to Gary Hooper – who tweeted up-close photos of a prototype Warrior Sports boot just last week, it seems to us that whenever you put a bored player in a room with some ‘secret’ boots and a smartphone, they’re destined to be tweeted.

Either that or the brands are leveraging player’s huge Twitter followings and over-eager media outlets to build up free hype for forthcoming products. But, honestly, that sounds a little far-fetched to us…

Alexandre Pato and Freddy Adu are the two latest Twitterati to give us a glimpse of some unreleased boots, and both happen to be Nike releases with a blue theme to them.

Following on from the ‘black pack’ that Nike started the season with – where every release sported a splash of black somewhere on it – Nike seem to be looking at a set of blue releases as we head into the Winter/Holiday 2012 release window.

Pato – who switched from the Mercurial to T90 silo this time last year – shows off a pair of sky blue and mango orange Mercurial Vapor VIII‘s. Definitely more distinctive than te Seaweed/Volt release that’s on-pitch at the moment, we think Nike have definitely found a winner in this colour scheme. 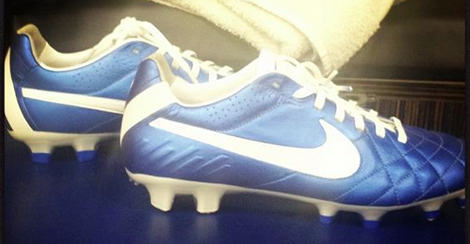 Rumour has it that the retail release of this colourway will feature a reenforced toe-cap, designed to stop separation between the upper and soleplate without sacrificing that paper-thin feel that so many players have grown to love on the Vapor VIII.

The Metallic Blue / White / Silver Tiempo Legend IV‘s belong to' Philadelphia Union’s Freddy Adu. Adu revealed on his Twitter account that he’ll be debuting this colourway when the Union travel to Adu’s first professional club – D.C. United – on Thursday in the MLS.

Nike’s Holiday/Fall boot launches all tend to land about mid-October, but now they’re in the hands of the players you can expect to see them on-pitch (And with official launch imagery and details on Footy-Boots.com, of course) as we head towards the end of September.

What do you think of these two colourways?

Written By
Kyle Elliot
More from Kyle Elliot
Zlatan customised his football boots in a very different way to what...
Read More