As with every major release that comes out, Nike have introduced two ‘sibling’ models to the Total 90 range – the Strike, and this – the T90 Shoot III 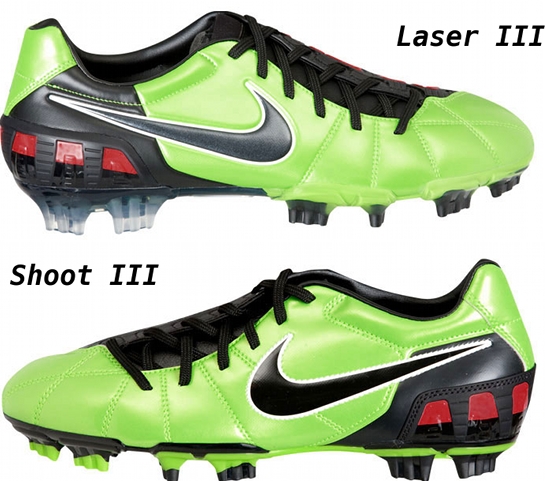 The shoot doesn’t incorporate the Teijin synthetic leather that it’s two big brothers do for the upper. Instead Nike have opted to fit the T90 Shoot III with a lightweight full-synthetic, that still provides comfort and durability, but is more cost effective to produce.

One feature that does carry over are the silicon ‘pods’ on the top of the instep. These pods line the area with which most people strike the ball – enabling a more even surface for an enhanced kicking area.

The rubber fins that line the forefoot of the Laser & Strike football boots have also been toned-down on the Shoot.

Instead of the aggressive rubber fins, the T90 Shoot III has a printed silicon pattern. This pattern enhances grip on the ball and increases swerve and accuracy on every shot.

Also adding to this football boot‘s shooting kudos are the side-offset lace, giving a huge surface area with which to strike the ball!

Release: Out now Rate it: