In the battle for the new season football boots, Nike have put together their Team T90 of players to champion their latest football boots – the Nike Total 90 Laser. 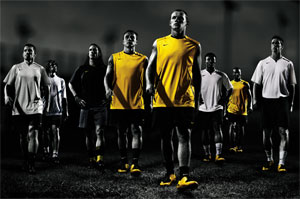 At the head of the team is Manchester United’s Wayne Rooney, who has taken over the legendary number 10 football shirt, last worn by Ruud van Nistelrooy, and having been worn in the past by greats such as Bobby Charlton, Mark Hughes and Denis Law. Rooney had previously worn the number eight shirt, which is now expected to be taken by new signing Owen Hargreaves. Curly-topped Hargreaves himself could be a T90 Laser team member, as he has reportedly signed for Nike from Adidas, but has yet to be seen in the swoosh football boots.

Nike are backing up their team by releasing videos of the players talking about the new football boots, and how great they are. The team line up features Puyol, Gattuso, Diego, Cannavaro, Frings, Rooney, Essien, Marquez, Torres and Malouda. As the football boot is meant to be a warning to the opposition, Nike clearly are so confident in their team that they have omitted to include a goal-keeper!

Watch Wayne Rooney talking about what he feels are the important aspects of his game of football. The video is helpfully subtitled in case you have trouble understanding Wayne’s strong scouse accent and proves to be an insightful and provocative piece. Bravo Roo! Watch the Wayne Rooney Nike T90 Laser Video.

Written By
Felipe
More from Felipe
With the attrocious weather putting an end to Andy Kay's transfer (to...
Read More