It’s hard to keep a good colour combo down, and Nike once again look at one of the Tiempo’s staple colourways as they launch the Nike Tiempo Legend IV – Black / White / Electric Green. 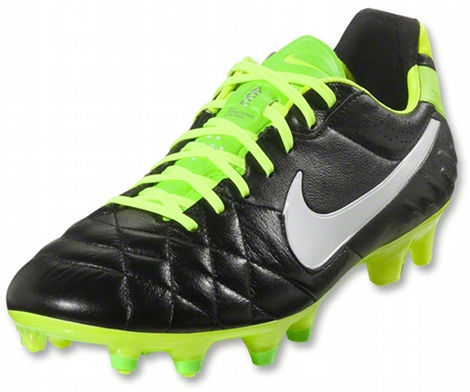 Reminiscent of colourways we’ve seen on both the Legend II and III, the Nike Tiempo Legend IV' – Black / White / Electric Green' once again pairs the classic Black and White Tiempo upper with a bold electric green highlight on the stud.

Of course, rather than just the tips of the studs, or the Nike branding, the designers in Oregon have gone all-out with a killer all-green soleplate. 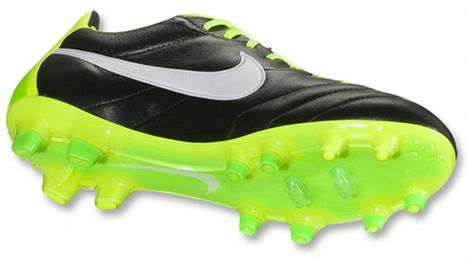 With a fade going from the middle of the plate and out to the edges, the Nike Tiempo Legend IV' – Black / White / Electric Green' has an almost radioactive glow about it’s soleplate, which will look awesome under floodlights.

The black colourway on this model definitely shows off the quality of the K-Leather used on the forefoot of these football boots – the quilted forefoot is looks particularly soft and supple, and you can really see the transition to the more matte Kangalite in the midfoot and heel.

That’s no bad thing, mind. Nike’s decision to construct the latest Tiempo out of two materials allows a combination of great touch and feel in the forefoot, whilst implementing the more supportive and waterproof Kangalite where it’s needed most.

A mix of conical and bladed studs on the Tiempo Legend IV' offer stability under the heel and quick turf release under the toes, creating a great balance that players can depend on.

What do you think of the new addition to the Tiempo Family?

Written By
Kyle Elliot
More from Kyle Elliot
Grab yourself one of 32 spots open to train at Spurs Lodge...
Read More