It’s a cold January night at a sports centre in London, as we survey a huge pitch surrounded by Nike Tiempo advertising hoardings and moodily illuminated by generator-powered floodlights.

With the temperature in mind, we could think of a dozen other things we’d rather be wearing than shorts and a training tee, but here we are.

Thankfully, few things lift the spirit like the sight of two huge vans, decked out with huge graphics of the Nike Tiempo Legend V and packed full of boots to test.

Cold fingers make lacing up a new pair of boots a challenge, so even with the Tiempo’s raft of comfort-boosting tech we barely have time to get our feet in them before the Nike Academy coaches have us warming up.

As we complete a lengthy session of touch, control and distribution exercises, the excitement buzzes up to another level as England and Cheslsea defender Ashley Cole takes his place on the sideline.

Offering up tips to the assembled group, the Champions League winning left-back clearly loves to share some of the wisdom he’s amassed in a storied career, dishing out advice on anticipation, jockeying attackers and reading the game. 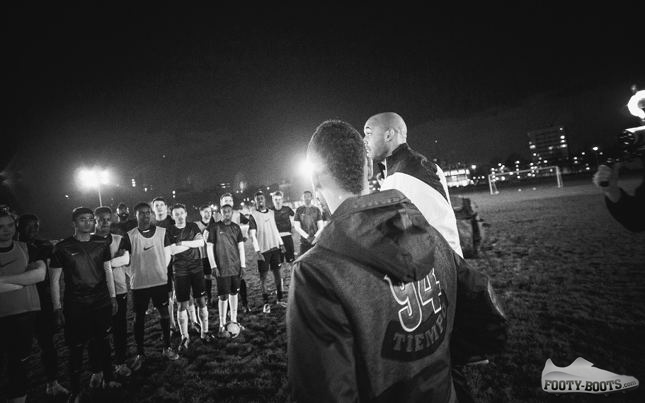 Bringing the session to an end, we thankfully head to a warmer locale for the next stage of the event; an event space just around the corner which Nike have turned into a Tiempo shrine.

Wall-to-wall, the room is kitted out in images of legendary Tiempo wearers past and present, arcade cabinets from the Tiempo’s debut year (1994) and is illuminated in the ‘Atomic Orange’ of the launch colourway of the boot.

Less of a stage for the Q&A and more of a few chairs in the middle of the room, Cole is joined by Rizzle Kicks and posed questions by Youtuber Poets Corner to weigh in on all aspects of Cole’s career.

With the boys from Rizzle Kicks being Gooners, a lot of focus is on Arsenal – but Cole doesn’t seem to mind. It might be that the Emirates faithful have no love lost for the left back, but forming part of the ‘Invincibles’ is clearly something Cole holds as a high point in his career and has no bitter taste in his mouth from his time in North London.

Wrapping things up, Ashley Cole is more than happy to chat things through with people at the event (media and otherwise), sign shirts and take an egregious amount of selfies with all in attendance despite it being knocking on 9pm.

We’re not sure Jose would approve of such a late night, but we’re more than sure it was worth it for all that made it down.