Just weeks away from the global finals of Nike’s The Chance in Barcelona, the UK’s representatives will have been glad to receive a helping hand from Manchester United’s Rio Ferdinand ahead of their trip.

Nike’s scouts watched more than 5,000 players in the UK and an extensive series of trials has produced three UK winners: Liam Baker (a forward), Jose Figura and Ashleigh Artwell (both midfielders) were selected by a panel composed of experienced coaches, ex-professional footballers and, of course, Rio himself.

By scouting thousands of youngsters in 55 countries the goal of The Chance is to form an elite squad of 16 unsigned athletes who will travel the globe, training with the world’s best professional teams – and Liam, Jose and Ashleigh will all be hoping to claim a place in this ‘dream team’.

Wanting to give the trio every advantage, Nike organised a special three-day course with the help The Chance ambassador and scout Rio Ferdinand. Held in Manchester, Rio’s Boot Camp arranged for the three hopefuls to stay in a mansion, get kitted out in the latest Nike Football and Nike Sportswear gear, and benefit from a genuine insight into the life of a professional footballer player by working with a range of Manchester United’s coaches and experts. 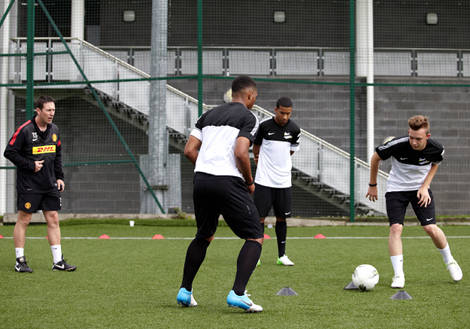 The first day consisted of a rigorous SPARQ fitness evaluation and some very intricate looking drills, before the buys were introduced to Yoga by Manchester United’s in-house expert (No, not Ryan Giggs).

The second day of the boot camp saw Liam, Jose and Ashleigh exposed to an England international and two of the best coaching footballing minds, as well as an England international. First team coach Rene Meulensteen taught the youngsters about the mental side of the game whilst assistant manager Mike Phelan gave them an in-depth insight into the tactical thinking behind preparations for every match.

The three players also hit the training ground with Manchester United and England’s Chris Smalling who worked on attacking and defending with them.

For the (scheduled) final day, Liam, Jose and Ashleigh hit the training ground with the Manchester United Reserve team, giving them a chance to pit themselves against players who are one step away from playing at one of the best teams on the planet. Not only that, the Chance UK representatives impress, with  reserve team coach Warren Joyce commenting: “looking at them this morning you would have expected that they would be at professional clubs already.”.

As they were packing their bags the next day, ready to leave Manchester, the lads received a call inviting them to stay on and train at the club for the rest of the week – they were put through three gruelling days of double sessions with the reserves before being given the chance to join the 1st team squad for the morning. p…

With the Global Finals being held in Barcelona from 19th-25th August, Liam, Jose and Ashleigh will be boarding the plane full of confidence after Rio’s Boot Camp. As Jose put it: “We’ll go into Barcelona on our top levels, so it’s going to be challenge for the guys out there.”

Written By
Kyle Elliot
More from Kyle Elliot
Bring your vision on the court to life with the new Umbro...
Read More