It seems like a lifetime ago when we first posted the video of Pep Guardiola heading to a small pitch in Spain and selecting his first choice to head to a regional final of Nike’s The Chance’. 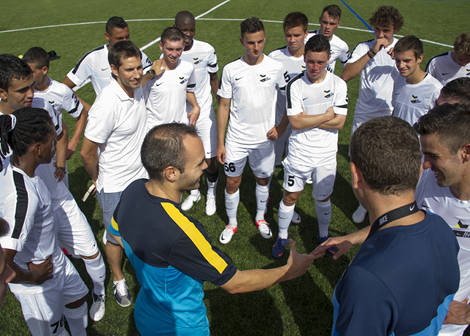 Alas, the regional finals have been and gone – as has Pep’s tenure at Barca – and the promised Global Final of the Swoosh’s global football talent search is well and truly under way in Catalonia.

After being installed in a plush hotel and given stacks of Nike gear, the Final 100 were soon given a reality check on their first day at the famed La Masia academy, and put through their paces working at first on basic control and passing, followed by intense drills concentrating on possession.

“It was a great first session,” enthused Liam Baker, from London. “Today is all about catching the coaches’ eye and it’s important to keep your head up if you make a mistake. Go and look for the ball again, show you’re hungry.”

Having trained hard in the Barcelona sunshine for the morning the Final 100 players were rewarded with a visit from several of FC Barcelona’s superstar players. Andres Iniesta, Gerard Pique and Adriano were among a group who after their own training session had ended, walked over to meet the youngsters before joining in with some drills and offering their own tips and advice. 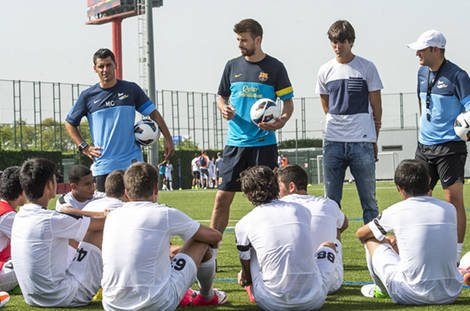 About The Chance, Adriano said: “This is such a big opportunity for the young footballers, they should take this chance as if it was the last of their lives and show what they are made of.”

And on the Final 100 working together as a team as well as for individual merit over the week in Barcelona, Gerard Pique commented: “At the end of the day football is a team game. Work as a team and have fun, learn more and you will stand out and be noticed.”

The Nike Academy’s head coach Jimmy Gilligan was pleased with what he saw. “The standard is very good,” he said, “We knew it would be but today was all about the basics. If a building’s foundations aren’t done properly, that building will fall down. I equate that to football and the guys didn’t disappoint.”