Nike have dubbed Friday’s titanic clash between Brazil and Holland at the Nelson Mandela Bay the ‘Green Game’ in honour of the kits the two teams will be wearing. 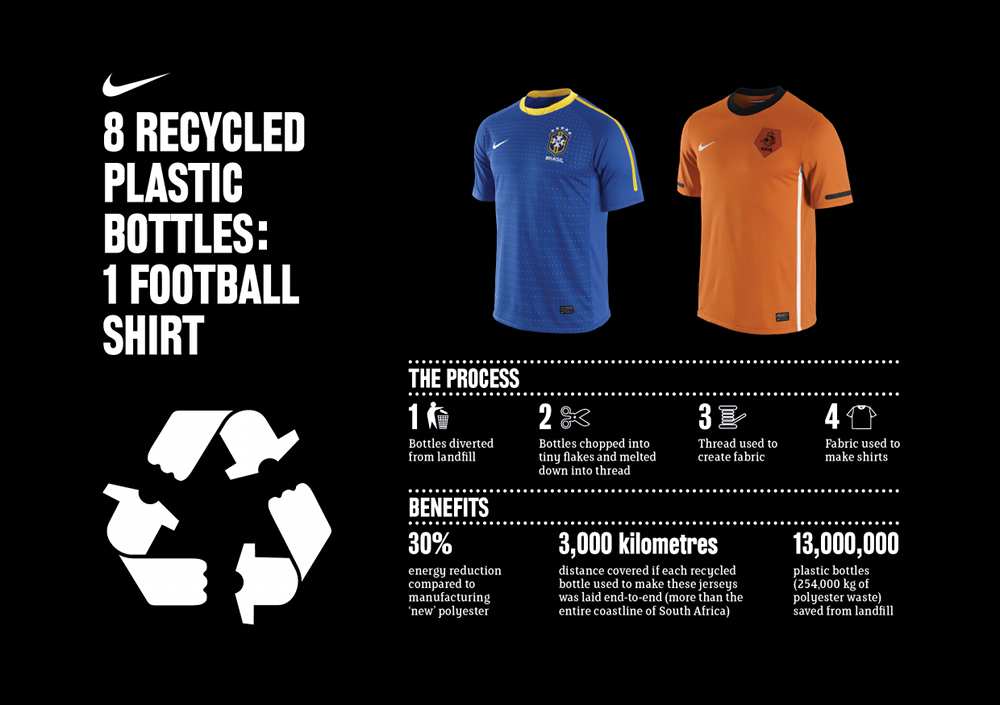 Nike’s fact-sheet for the game – click for the bigger version!


Whilst not the first All-Nike Clash of the 2010 FIFA World Cup (Correct us if we’re wrong, but we believe that honour belongs to USA vs Slovenia) but this is definitely the biggest!

Brazil have only reached their fluid best for a few fleeting moments this World Cup, and Holland have been looking disciplined and compact – this is definitely the case of the potentially unstoppable force against the immovable object!

Transcending this on-pitch match-up though, is the message of Nike’s Green Game. Both Holland and Brazil’s football shirts are made entirely from recycled polyester, each one directly produced from up to eight recycled plastic bottles.

The plastic bottles are diverted from Asian landfills, then chopped into flakes and melted down to a solution from which yarn is produced. This is then knitted into the fabric used to make the shirts. All national team shirts created by Nike for summer 2010 (whether worn by players or available for fans) use this process.

The kits are part of Nike‘s ‘Considered Design’ programme, which aims'  to reduce or eliminate toxics and waste, increase the use of environmentally preferred materials and use Nike innovation to create more sustainable products.

* Nearly 13 million plastic bottles have been diverted from landfill by using recycled polyester for Nike-sponsored national team jerseys, preventing a total of around 254,000 kg of polyester waste, from being buried at landfill sites.

* This would be enough to cover more than 29 football pitches, and if each recycled bottle used to make these jerseys was laid end to end they would cover over 3,000 kilometres, more than the entire coastline of South Africa.

* This saves precious raw materials and reduces energy consumption by up to 30% compared to manufacturing virgin polyester.

What do you think of the initiative – and more importantly, who will you be backing to make to to the Semi’s!?

Written By
Kyle Elliot
More from Kyle Elliot
The concept remains the same, but the execution is different - see...
Read More