So, the now that we’ve all been formally introduced to the new Nike T90 Laser IV, we thought we’d take a closer look at the new takedown football boots – including the Nike T90 Strike IV. And we’re pleased to say we’re pleasantly surprised! 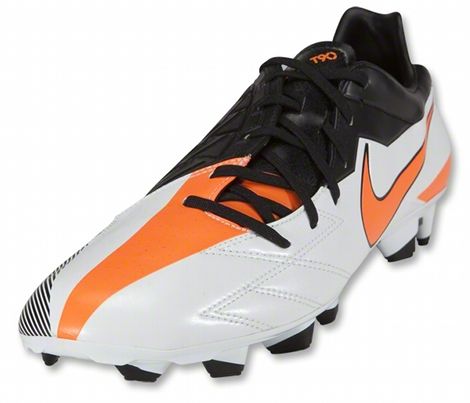 Given the distinctive and stylish look of the T90 range of football boots, we see the Strike and Shoot perhaps more often than we see any other takedown model.

It’s not hard to understand why, either. The T90 range has always been hard-wearing and reliable as well as very reasonably priced – so we were a bit gutted to see that the Nike T90 Strike IV has received a price-hike like it’s bigger brother.

But looking over the specifications of the new Nike T90 Strike IV, we can start to see why there would be a price-boost, as these football boots certainly give the full-priced Laser IV a run for their money in terms of features.

Inset: The embossed channels on the outside-toe of the Laser IV
The new Nike T90 Strike IV uses a performance grade synthetic upper, different to the Teijin synthetic leather used by the Laser, but Nike say still does a remarkable job at keeping moisture out as well as staying soft and supple.

You’ll also notice the ‘channels’ containing stitching over the outside (little toe) of the boot, which are embossed into the upper of the Laser IV have are now also just dual-stitched into the upper.

One of the best things about the Nike T90 Strike IV is how similar the new Adaptive Shield strikezone is to that of it’s bigger brother; they’re practically identical in construction.

However, the difference between the Strike and Laser isn’t in the Shield itself, it’s how it’s integrated into the boot.

Whilst the Laser’s shotshield uses an expensive process that integrates the Adaptive Shield into the synthetic upper of the boot, the Nike T90 Strike IV uses a more traditional stitching and panel construction to implement the shield. 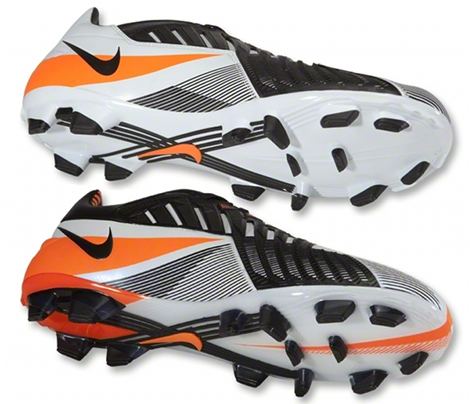 The stud configuration of the new Nike T90 Strike IV is almost identical to the Laser, even featuring the same ‘off-the-toe’ secondary grip zone at the tip of the boot.

You’ll notice from the huge stripes across the sole, the Strike also features a similar mid-foot re-enforcement system to that of the Laser IV, resulting in more power transferring into the ball.

You can probably tell from the photos, though that the Strike doesn’t have the same dual-density moulded studs as the Laser IV, but aside from a minor difference in weight, this is mostly cosmetic.

If you were looking to tell the football boots in the range apart from one another, here’s some handy tips:

The Nike T90 Strike IV has:

– A mostly-white heel section with a black outside ankle collar. The Laser IV‘s has a lot of black, and the Shoot IV also has a white ankle collar

– A White Sole with Black Midfoot supports. The Laser has Orange at the Heel and Toe, whereas the Shoot has an all-white midfoot support.

– Less detail on the tongue with a small ‘T90’ Logo. The Laser has a large logo with some orange stripes, and the Shoot has a very similar tongue to the Strike, but with a larger T90 Logo.

– An all-black Adaptive Shield. The Laser has some orange triangle shapes close to the laces, whereas the Shoot has some large white stripes across the top.

It’s also worth mentioning that the Black/Tour Yellow/Metallic Lustre version (and, we imagine, all future Nike T90 Strike IV‘s in the ‘alternate’ colourway) has a leather-effect print on the synthetic to make it look more like KangaLite, and is also more of a Matte finish.

Available to pre-order now, the Nike T90 Strike IV is available in both White/Total Orange/Black and Black/Tour Yellow/Metallic Lustre, both versions are set to retail at £79.99/$99.99.

These football boots hit store shelves on October 1st, and will be available in FG, SG & Astroturf soleplates upon launch.

What do you think to the Nike T90 Strike IV?

A worthy member of the T90 football boots Family? Or has the price-bump ruined them for you?