We love takedown football boots here at Footy-Boots.com which is why we’re putting the new Nike T90 Shoot IV front and centre!

Given the distinctive and stylish look of the T90 range of football boots, we see the Strike and Shoot perhaps more often than we see any other takedown model.

The Strike in particular is something we see plenty of, thanks to it’s Astroturf soleplate option!

So, how does the Nike T90 Shoot IV stack up to it’s two bigger brothers?

The new Nike T90 Shoot IV features a synthetic leather upper that mimics many of the properties of the Laser IV, but at a much more economical price.

Similar to the new Strike IV, the Nike T90 Shoot IV‘s stitching isn’t concealed in embossed channels across the boot’s upper, instead having a more traditonally stitched finished across the toes.

It’s also worth pointing out that whilst the Strike and Laser both have their signature Nike ‘ticks’ moulded as part of the upper, the tick on the Nike T90 Shoot IV is stitched on. 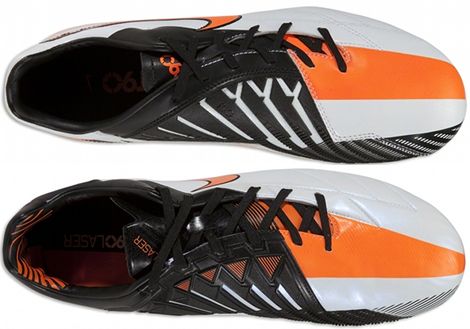 As many long-time fans of the T90 series will be aware, the shoot’s strike-zones are often seriously toned down versions of their more expensive counter parts.

And whilst the Nike T90 Shoot IV still doesn’t pack the same punch as it’s older brothers in this department, it doesn’t quite suffer from the ‘painted on’ rings of the Shoot I & Shoot II.

The material that makes up the Adaptive shield is raised off the upper in a manner similar to the Laser, though the ‘Perfect Strike’ zone on the top has been toned down.

Fans of the Nike T90 Shoot IV will be pleased to learn, though, the ‘micro-fins’ towards the toe are still present (though admittedly different to the TPU ones on the Laser). 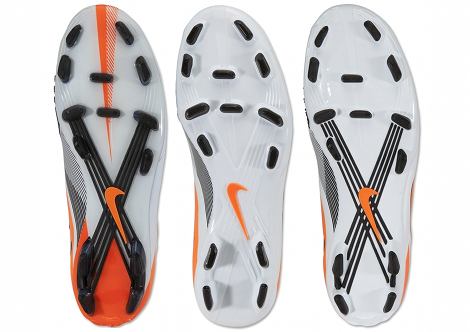 The stud configuration of the new Nike T90 Shoot IV is almost identical to the Laser, though it lacks the ‘off-the-toe’ acceleration zone that’s featured on it’s two bigger brother.

You’ll notice that unlike it’s stablemates, the huge stripes across the sole are actually part of the sole ‘mould’ itself. So whereas the Laser IV & Strike’s midfoot are re-enforced by additional material, here on the Nike T90 Shoot IV, it’s presence is purely superficial.

You can probably tell from the photos, though that the Strike doesn’t have the same dual-density moulded studs as the Laser IV, but aside from a minor difference in weight, this is mostly cosmetic. 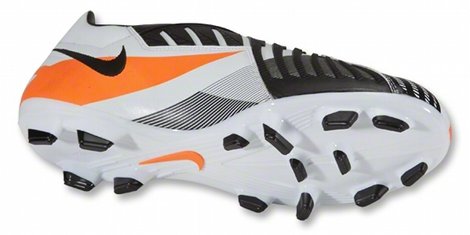 If you were looking to tell the football boots in the range apart from one another, here’s some handy tips:

– A mostly-white heel section with a white outside ankle collar. The Laser IV‘s has a lot of black, and the Strike IV also has a black ankle collar

– A White Sole with White Midfoot supports. The Laser has Orange at the Heel and Toe, whereas the Strike has an black midfoot support.

– Less detail on the tongue with a large ‘T90’ Logo. The Laser has a large logo with some orange stripes, and the Strike has a very similar tongue to the Shoot, but with a smaller T90 Logo on the Strike.

–  Large amounts of White in the Shot-shield. The Laser has some orange triangle shapes close to the laces, whereas the Strike’s is mostly black.

It’s also worth mentioning that the Black/Tour Yellow/Metallic Lustre version (and, we imagine, all future Nike T90 Shoot IV‘s in the ‘alternate’ colourway) has a leather-effect print on the synthetic to make it look more like KangaLite, and is also more of a Matte finish.

Available to pre-order now, the Nike T90 Shoot IV is available in both White/Total Orange/Black and Black/Tour Yellow/Metallic Lustre, both versions are set to retail at £49.99/$59.99.

These football boots hit store shelves on October 1st, and will be available in FG, SG & AG soleplates upon launch.

What do you think to the Nike T90 Shoot IV?

A worthy member of the T90 football boots Family? Or has the price-bump ruined them for you?