Ever since the Clash Collection version of the Laser we saw in the summer, we’ve been waiting for Nike to really ‘nail it’ with another colourway for their power/accuracy boots – and we think they’ve done just that with the Nike T90 Laser IV – Volt / Citron / Black! 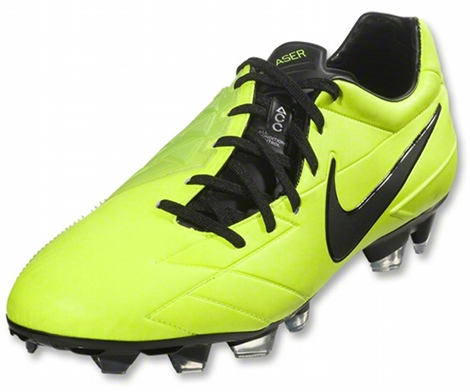 Whilst we’ve seen the ‘Volt’ colour used plenty of times on the Vapor series, this is the first time we can remember seeing it as the ‘main’ colour on a Laser boot – and the result is exceptional! 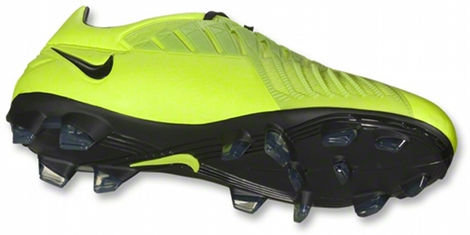 Despite the excessively bright colour, this is arguably the cleanest-looking T90 Laser IV' yet. The simple contrast of Volt and Black give the boot a clean aesthetic – something that the Laser has lacked in the past with it’s multi-coloured upper and intricately-designed strike zone.

Speaking of the strike zone, Nike dubbed this version the Adaptive Shield. Designed with slats and cut-outs across it’s design, the Adaptive Shield earns it’s name by being flexible and moving with the foot, allowing for' consistent' contact with the ball.

Nike’s design team also worked in an incredible level of versatility into the Adaptive Shield. At the ‘top’ of the boot, the panels are flatter, allowing for flush contact with the ball, whilst towards the toe the Shield is equipped with tiny bristles to increase friction on shots and crosses – allowing the striker perfect control over their shot.

This version of the T90 Laser IV' is also cut from a Teijin synthetic, so the upper remains light, waterproof and responsive – perfect for highly-mobile strikers. Following on from last season’s release, the Nike T90 Laser IV' – Volt / Citron / Black' also boasts Nike’s All Conditions Control for games in tricky weather. 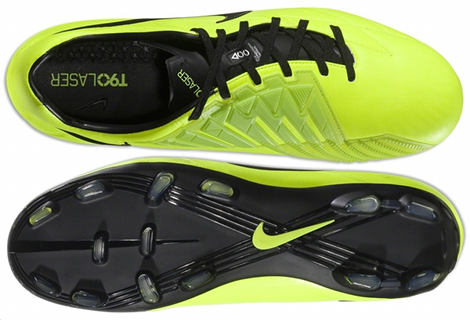 The soleplate has been designed for improving responsiveness without sacrificing power; the new stud configuration features wider-lying studs for support when quick lateral movements, whilst it’s also reenforced in the midfoot to minimise power loss when striking through the ball.

Launching January 1st, you’ll have to wait until the New Year to get your mitts on the Nike T90 Laser IV' – Volt / Citron / Black' – will you be picking up a pair?