Continuing a tradition that goes as far back as the T90 Laser II, the new Nike T90 Laser  IV has launched with a second colourway with a different material used on the upper!

But is it just another Kangaroo Leather version of the T90 football boots?  Not quite… 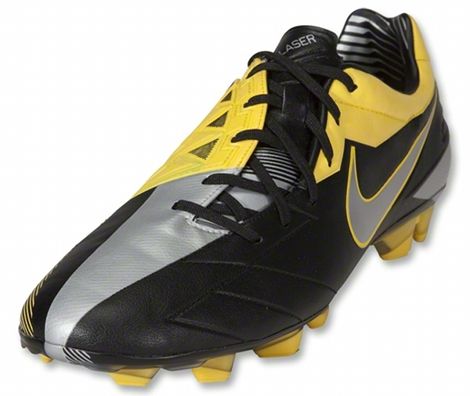 The biggest change from the White/Total Orange/Black Nike T90 Laser  IV is the upper.

Whilst their launch companions use a super-thin synthetic leather closer to the Teijin of the Superfly III, the Nike T90 Laser  IV – Black/Tour Yellow KL is constructed from Kangalite, which we’ve seen Nike use on the new Tiempo Legend IV & CTR360 II. 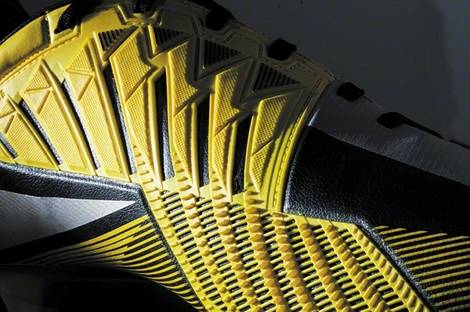 Why Kanga-Lite? Well, Nike’s premium synthetic K-leather has much of the flexibility and comfort of Kangaroo skin, but retains around 20% less water, keeping these football boots lighter for longer – just as well given that the Nike T90 Laser  IV is launching at the start of winter!

Players in the Nike T90 football boots roster more often than not play in the synthetic version, but some players – like Fernando Torres and Martin Skrtl – will play in nothing but the leather version!

It will certainly be interesting to see which version top players choose, and how the die-hard leather wearers react now there’s no genuine K-Leather version!

The new Black/Tour Yellow is pretty perfect for those of you who didn’t like the bold contrasting colourway of the synthetic Nike T90 Laser  IV, and the silver Metallic Lustre adds a little bit of flash to stop these football boots looking anywhere near pedestrian.

We especially like the heel section, which ties in all three of the colours on the Nike T90 Laser  IV – Black/Tour Yellow KL together around the American brand’s signature tick.

Reaction has been certainly interesting here on Footy-Boots.com since the Nike T90 Laser  IV‘s launch yesterday afternoon, with many on our Facebook page and comments section pleasantly surprised by the look of Nike’s latest football boots, in comparison to the leaked photos that had been doing the rounds.

Others, however, seem to think the boot is very ‘busy’ looking, especially on the instep which seems to have lines and angular shapes running every which way!

Which side of the fence do you fall on?

Written By
Kyle Elliot
More from Kyle Elliot
We take a sprint down memory lane in Puma's lightest and fastest...
Read More