Inter Milan  star Wesley Sneijder became the first to take to the pitch in an fully-revealed pair of the new Nike T90 Laser IV football boots last night in an away game against Palmero.

After being spotted on numerous occasions in blacked-0ut versions of the new Nike power/Accuracy football boots, the Dutchman took to the pitch last night in a gorgeous White/Black/Orange colourway of the Nike T90 Laser IV, which is set to be one of the two available at launch.

Whilst the game didn’t go entirely as planned for the nerazzurri in Palmero last night (the match was a seven-goal-thriller with Palmero making a stunning comeback to win 4-3), Sneijder will take some solace in his debut in the new Nike T90 Laser IV a relatively successful one; appearing from the substitutes bench to assist Diego Forlan’s first goal for the club.

Whilst these were the official on-pitch debut for the new Laser, fans of Footy-Boots.com on Facebook were able to keep tabs on photos from Inter Milan’s training session on Friday.

Both Pazzini and Sneijder were breaking in their new football boots in a training session that allowed us to get a great up-close look at the Nike T90 Laser IV; including the orange personalisation on the ankle collar of the Dutchman. 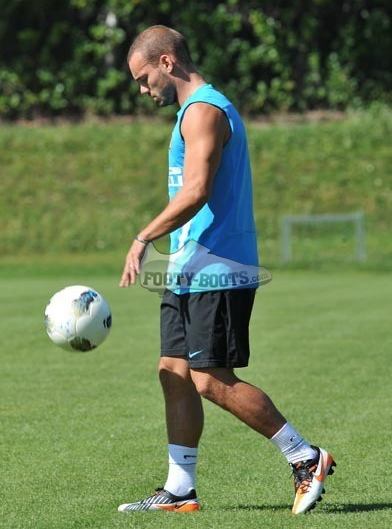 Looking at Sneijder’s new football boots closely, we can new see plenty of the details that Nike have tried to keep undercover with the black-out models that have preceded this great launch colourway.

The obvious talking point is the new strike zone on the Nike T90 Laser IV, or – as Nike are calling it on this incarnation – the Adaptive Shot Shield.

Rather than the fins and pods that defined the T90 Laser III, Nike’s new T90 Laser football boots will instead have firm rubber ‘slats’ across the toe and instep. 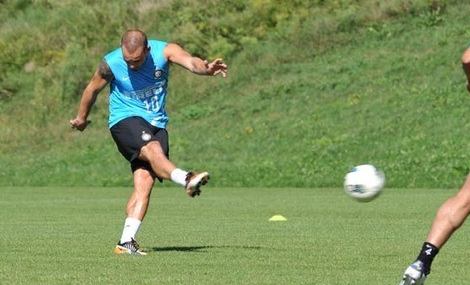 Our best guess is that Nike have attempted to combine the best of the past three T90 Laser technologies, with the new Adaptive Shot Shield sitting more or less exactly where the old strikezone did on the Laser 3, but with raised firm-rubber (rather than soft fins) similar to the Laser I & II, though this time in Stripes, not Hoops.

Another key feature change is the heel counter seems to have been made internal and much less of a feature on this model.

Wesley Sneijder wasn’t the only player to be spotted training in a fully-revealed Black/White/Orange pair of Nike T90 Laser IV‘s this weekend.

Arsenal’s Marouane Chamakh also adopted his usual on-pitch position (sitting down, not doing much) in training at the end of last week, opting to wear his new football boots. 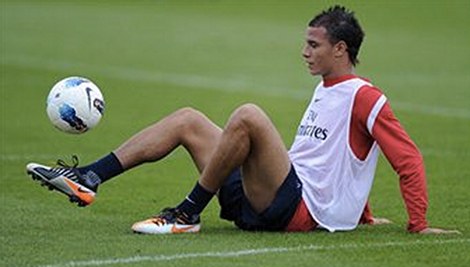 We have known for a while that Chamakh was likely to switch to the Nike T90 Laser IV upon release, having trained in the Black-Out model so many times, so we thought it was a spot well worth including.

It also gives us a better look at the shape of the new Power/Accuracy boot, which seems to be a lot sleeker and refined than the bulky, wide-fitting Laser III’s; In fact, the shape of the Nike T90 Laser IV is much more like something like the CTR360 than any previous Laser.

What do you think of the launch colourway for the Nike T90 Laser IV?

Special thanks to David D & Carl C for letting us know about this one – Cheers guys!