After seeing plenty of Nike’s latest Power/Accuracy football boots on the feet of someone being touted as a potential Manchester United player, it’s good to finally see the Nike T90 Laser IV on the feet of two long-standing Red-Devils!

Thanks to Ammar R on our Facebook page for the spot! 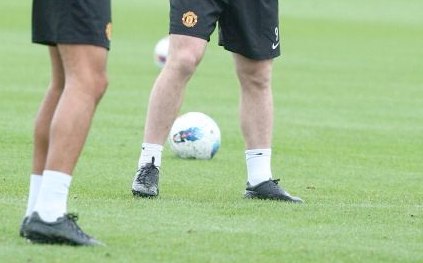 That’s right, whilst Wesley Sneijder might not have yet made the transition from Milan to Manchester but his blacked-out football boots have, as they appeared on the feet of both Wayne Rooney and Rio Ferdinand in a training session earlier this morning.

As two long-time Laser wearers, it’s no surprise to see the two England Internationals take to the turf at Carrington in the inconspicuous new Nike T90 Laser IV. 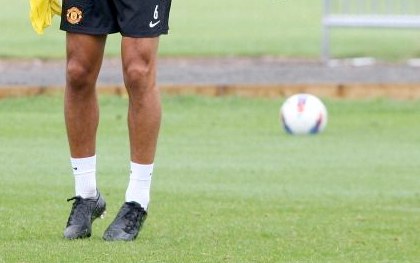 This time last year Nike would have had and embarrassment of players to test out a new T90, but with Paul Scholes since retired and Evra now playing in the new Tiempo Legend IV’s, the pickings are comparably slim!

These guerilla photos of Nike’s latest football boots don’t really offer us much in the way of new information, with Nike’s black-out job being frustratingly superb. 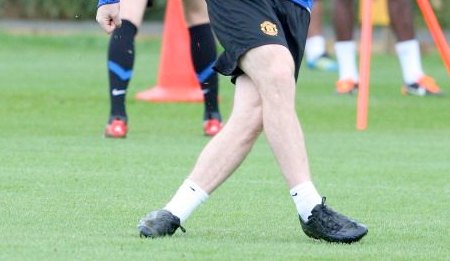 That said, the more we look at the design of the upcoming Nike T90 Laser IV, the more we think it bares a striking resemblance to the Nike5 Bomba Finale! The slightly offset lacing, with an independent tongue, and the overall shape of the boot definitely give us a similar overall feel to Nike’s premier small-sided game trainer.

The main difference between the two, of course, is the strikezone that dominates the instep of the boot. Whilst the Bomba has a sleek, low-profile honeycomb design that covers the inside arch and ‘throat’, the' Nike T90 Laser IV has a strikingly huge forefoot and instep area dominated by very aggressive looking fins.

The photos of Rooney, in particular, really show off just how much the individual ‘slats’ jut out from the surface of the boot – making the instep look like part of an Autobot, never mind a football boot! 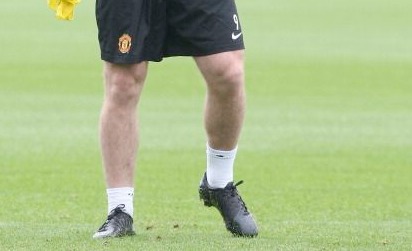 Despite being football boots designed for power and accuracy, this latest batch of photos also show off how slimmed down the boot looks compared to the rest of the Laser III’s. If we had to predict anything from these football boots, it’s that Nike colour well be building the' Nike T90 Laser IV off a slightly narrower last, and have likely dropped the weight to compete with others in the area.