Phew! The World Cup’s barely been over 12 hours and already Nike are hitting us with some brand new colourways! Ain’t no rest for the wicked, I tells ya! 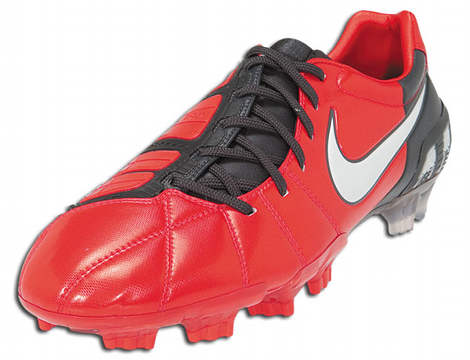 No prizes for guessing which Premier League Striker will most likely be donning these come the new season in August!

That’s right, we fully expect Wayne Rooney to stride out onto the Wembley Pitch on August 8th, for the Premier League’s annual curtain-raiser, the FA Community Shield.

We think the football boots themselves look pretty sharp too!

Red boots are always tricky to pull off, but Puma have done it recently with their new PowerCat 1.10, and adidas’ Champions League F50i in Poppy Red were one of our favourite boots of last season, and these new Nike T90 Laser III‘s follow on this red-hot streak!

The T90 Laser III had a very respectable World Cup showing in 2010, with 80 players opting to wear this high-accuracy football boot, and 19 goals were scored by players wearing it too.

What do you think of this latest Nike colourway?

Let us know with a comment or the boot-o-meter!

Written By
Kyle Elliot
More from Kyle Elliot
Could this be the latest incarnation of adidas' legendary Power football boots?...
Read More