The brightest of Nike’s new Summer colourways has to be this: The Nike Mercurial Vapor Superfly II Bright Cactus/White/Anthracite ! 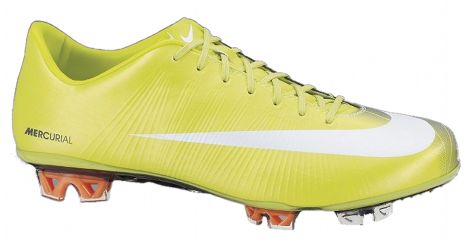 In a base colour that takes us back to the Nike Mercurial Vapor III Cactus, this Superfly II offers a drastic new direction for the boot after the Purple and Obsidian colourways that have preceded it.

This bold new colourway should be tearing up pitches across the world in the new season on the feet of some of the best speedsters in the game, such as Theo Walcott, Cristiano Ronaldo and Alexandre Pato.

We reckon the Bright Cactus colourway is going to be a hit all across the World, as citrus-y coloured football boots always seem to be a hit with top-flight players. Didier Drogba and Cristiano Ronaldo in particular have always been big advocates of boots like the Vapor Citron SL and the lemony Yellow/Gold/Black Superfly I‘s!

Obviously to go along with the Superfly II release, there’s also the Mercurial Vapor VI!

And is it just us, or does the Vapor VI pull off the Bright Cactus/White/Anthracite colourway better than the Superfly II?

We think it’s the lace cover and smoother surface, but we’re not sure why it just seems to look better!

Due for release on August 1st, for the handsome sum of £275 for the Superfly II and £180 for the Vapor VI

What do you think to these new Mercurial Vapor Superfly II‘s?

Enough to tempt you? Or are you just glad to see the back of the Purple boots we’ve had recently?