Nike presents Megan Rapinoe with commemorative Mercurial Vapor 13 made especially for her in recognition of her massive achievements throughout the year.

The pink and gold colourway draws inspiration from Rapinoe’s signature hair colour and the trophies she has won. Her first and last name appear prominently on the lateral sides of the boot, with “Just Do It’ on the medial side. The heel counter and sock line carry the four stars Rapinoe and her American teammates proudly sport on their national team shirts. 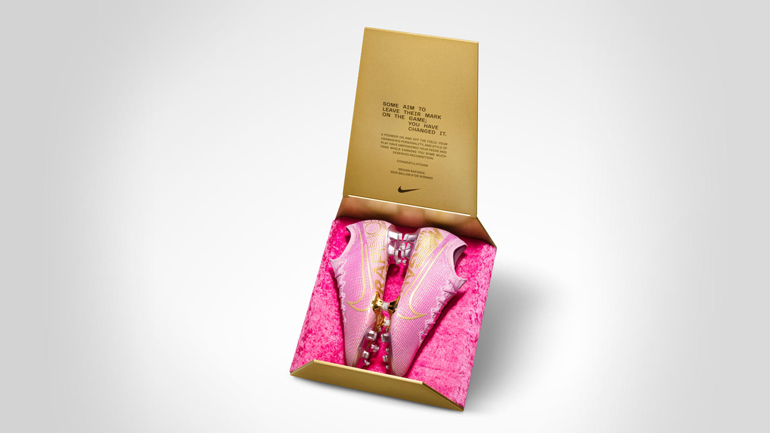 The football boot was presented to her in a special box with an inscription that read: “Some aim to leave their mark on the game; you have changed it. A Pioneer on and off the field, your unabashed personality and style of play have empowered your peers and fans while earning you some much-deserved recognition. Congratulations Megan Rapinoe, 2019 Ballon d’Or winner.”

A great year for Rapinoe, being the  World Cup winner, where she was named player of the tournament and finished joint-top scorer with six goals. In September she was also awarded FIFA’s Best award. And now winning the 2019 Ballon d’Or.

This special edition will not be sold at retail.