After releasing one of the most daring and futuristic football boots in their history earlier this week, Nike are readressing the balance with the all-new Nike Premier.

Styled after some of the most iconic football boots in the American brand’s history, the Nike Premier is all about incredible touch and ball feel in a sleek, retro package.

Taking it’s design queues from Nike’s first ever football boot – a 1971 release simply called the ‘The Nike’ – and the 1994 Tiempo from the US World Cup (which has already inspired a boot or two, as you may recall) Nike say they ”Wanted the Premier to have a simple visual design but for it to be bold and, stylistically, carry a lot of Nike Football DNA.”

Something that’s definitely reflected in the cleat – beautiful black leather with a classic Nike swoosh on each side is definitely a style choice we can get behind, and is bold in it’s simplicity.

As for that lovely leather, in a first for Nike (that we know of), Nike have utilised goat leather for a soft, supple finish to the boot that will also honour their promise to phase out K-Leather from their products.

Nike say this isn’t a compromise, though – going as far as to say “The premium leather used for the upper sets the benchmark for softness and feel for leather-based boots”. Coming from the company that created the Tiempo Legend IV Elite, that’s a pretty bold statement. 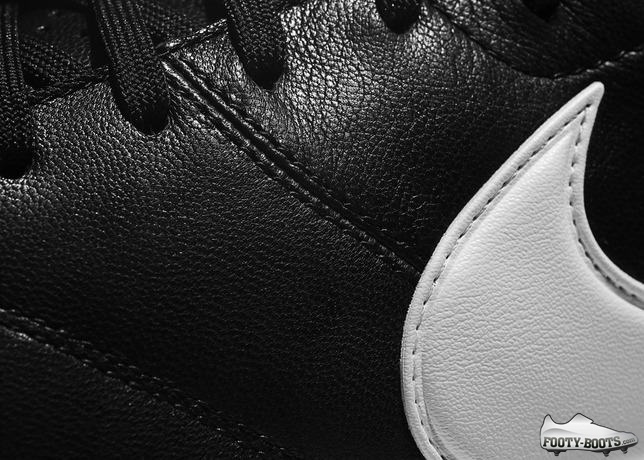 “A lot of players will see the Nike Premier and be reminded of the early-to-mid 1990s. When they put the boot on and get out on the pitch, they will soon realize that this is a 21st century product.” –  Phil McCartney, Vice-President of Nike Football Footwear

The soleplate is designed to be versatile, and offer excellent traction on a variety of services. The design also integrates a transitional flex across the forefoot, for superb give in the forefoot and stability in the midfoot and heel.

The Nike Premier also shares a surprising connection to the new Hypervenom – they’re both built off the same last (hard to believe, we know) – so both boots utilise the most anatomical fit Nike have ever created, putting nothing between your foot and consistently perfect ball contact.

Set to launch in North America June 1 and will be available elsewhere from July 1, did we mention the Nike Premier will also drop for under $100?

That’s right – $99.99 is the pricetag, and it’s certainly an appealing one for players who want a great all-around boot.

Let us know in the comments what you think of this new release from the Swoosh!

Written By
Kyle Elliot
More from Kyle Elliot
PUMA kit out their most powerful boots with an unmissable new look...
Read More