As the curtain closes on another thrilling international tournament, Spain have once again emerged the victors with a memorable 4-0 win over Italy in Kiev.

As with his match-winning performance in South Africa 2010, Andres Iniesta was once again at the heart of the La Roja machine, pulling the strings and executing passes that other players can only dream of.

To mark the Barca midfielder’s historic achievement, Iniesta is at the centre of the ‘To Be Continued’ segment of the mind-blowing ‘My Time Is Now’ campaign. Focusing on bold outdoor billboards, Nike’s message is clear; that the Spanish story isn’t finished yet. 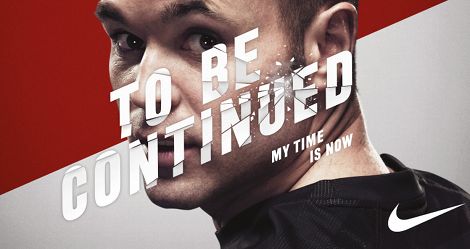 Tying in with the print and poster campaign is this new viral video, starring Neymar.

The Brazilian wonderkid watches the Euro 2012 final alone, and as the final whistle blows he sends Iniesta an ominous text ‘Hope to see you in 2014’.

Whilst it almost certainly refers to the World Cup on Brazilian soil, there have been plenty of transfer rumours surrounding the 2011-2012 FIFA Goal of the Year scorer and a possible pre-arrangement with Iniesta’s Catalan employers.

Can Spain maintain their dominance at the next World Cup?

Written By
Kyle Elliot
More from Kyle Elliot
England's away look for the World cup is revealed in another interpretation...
Read More