In a move that may have surprised many – Nike have announced a new Superfly, – the Mercurial apor Superfly II Elite! 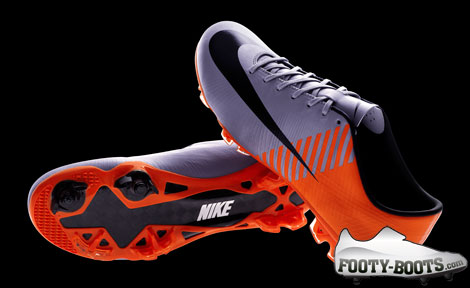 Even though the original Superfly II only made the shops last month, Nike have released this slightly tweaked version to be worn by all the Nike Sponsored Pros at this Summer’s World Cup.

Priced the same as the original Mercurial Superfly II at £275, this Elite Series football boot tips the scales 5% lighter than the featherweight Superfly II.

Despite the Superfly II being the original football boot to boast Nike’s ‘Flicker’ vision enhancing technology on the upper, Nike have already slightly refined the pattern for the Elite Series.

Players emphasized that acceleration around a defender is just as important as beating him in a straight line. The Nike Sports Research Lab researched the world championship finals in 2006 and found that there were 845 slipping events over 63 games, or roughly 14 per game.

This football boot is designed to minimize this costly slipping.

Toe-off traction for bursts of speed

As with all the other Elite Series boots, the Mercurial Vapor Superfly II Elite comes straight off the shelf with the Nike Football+ training program: Focusing on getting you fast, fast!

The Nike Football+ element packaged with the Superfly II Elites gives you the chance to learn the insights into speed, skill and combining the two that are normally reserved for the Brazilian elite!

Tell us what you think of the Mercurial Vapor Superfly II Elite below, we’re really interested in what you guys think here!

We reckon it’s a smart move by Nike to price it the same as the regular Superfly II (If you could ever say a Superfly was ‘regular’), but we’re not sure that making it 5% lighter is enough to warrant a new model – we’d have been happy with just the new colourway!