Nothing says summer like yellow and orange; preferred colours of flowers, ice lollys (popsicles for our American brethren), and the sun itself, it’s no surprise to see Nike brighten up the Mercurial Vapor IX in such a colourscheme with it’s fifth official colourway – Volt / Black / Citrus.

Looking every inch a summertime release, we’re half expecting these to be officially endorsed by the Fresh Prince and Jazzy Jeff, rather than Cristiano Ronaldo and Theo Walcott.

A new dual-density soleplate also allows the Vapor IX to support and stabilise the midfoot and heel, whilst a more flexible glass fibre blend towards the toe keeps the boot comfortable and responsive where it’s needed most.

Nike have also responded to athlete feedback, making the insole and sockliner more comfortable than ever before.

Speaking of athletes, sharp-eyed football boot fans may have already caught a glimpse of this new colourway when Stephan el Shaaraway tweeted a picture of them earlier this month. 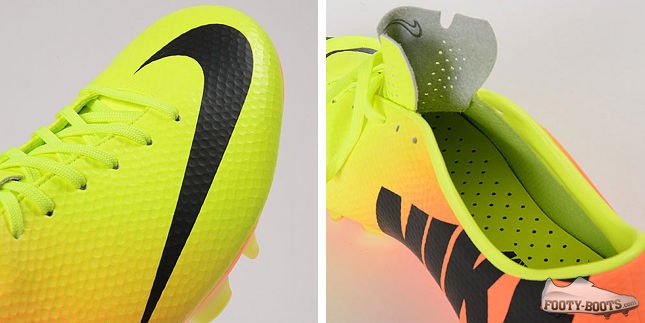 With Neymar moving to the new Hypervenom, the fleet-footed Italian international will be one of the Mercurial range’s key players on the pitches of Brazil this summer in the Confederations Cup.

Between this summer’s glamour tournament, the MLS and the pre-season tours, the Mercurial Vapor IX – Volt / Black / Citrus will have no shortage of exposure on suitably sun-drenched pitches before featuring on European pitches at the start of the new season.

Until then, you can get your feet in a fair by pre-ordering your pair now – but the actual shipping dates (as with Nike’s other two big summer releases) will depend on your region.

Written By
Kyle Elliot
More from Kyle Elliot
Nike push their luck by visiting Londons from around the world ahead...
Read More