Whilst there have been many truly great football boot colourways, few can claim to be genuine sports culture icons in the way the 1998 Nike Mercurial can.

Inspired and designed around the playing style of Ronaldo LuÄ‚­s NazÄ‚Ë‡rio de Lima- or simply Ronaldo – the tagline for these football boots was Ĺ›Ultralight, so your legs can be as fast as your' imagination,ĹĄ.

Ronaldo not only captured the imagination with his style, speed, skill and incredible eye for goal, but he also reignited the reputation of Brasilian football, and earning him the nickname “El' FenÄ‚Ĺ‚meno,” .

We’ve celebrated the football boots and career of the original Ronaldo on more than one occasion here on Footy-Boots.com, and one of the boots most commonly associated with footballing icon is the silver-yellow-blue Nike Mercurial he wore in France during the summer of 1998.

Among a field of black-and-white, the Nike Mercurial stood out for it’s sleek shape and speed-inspired visual design.

To celebrate 15 years since the debut of that boot, Nike has created a Mercurial Vapor IX inspired by the 1998 design. 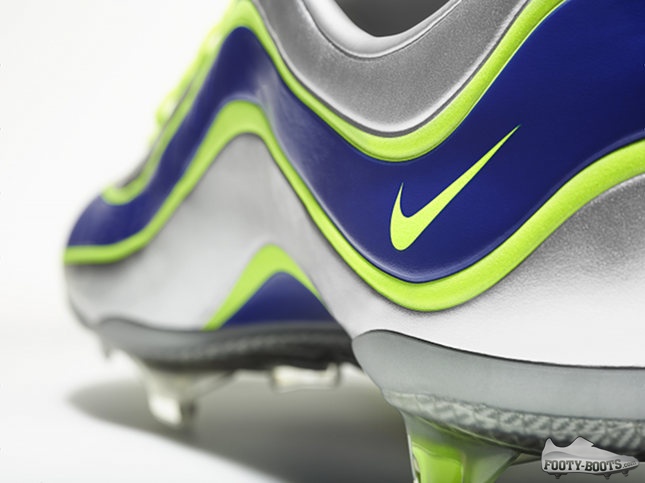 Ĺ›Ronaldo's impact on the game 15 years ago was immense, and in the run up to 2014, we wanted to celebrate that boot and the man himself. We thought a modern construction of his 1998 boot would be a great commemoration of that moment.ĹĄ

Whilst the original version of this boot was constructed of multiple materials stitched together, The Nike Mercurial Vapor IX SE – 15th Anniversary is a one-piece, seamless upper as per other Vapor IX releases.

Not only from the point of view of construction, but the team approached it with a 2013 aesthetic in mind too. The yellow from the 1998 version is replaced by the distinctive Volt that Nike have made their own over the last 12 months, and the original silver is updated with a metallic finish.

1,998 pairs of the Nike Mercurial Vapor IX SE – 15th Anniversary' will be available beginning May 8 at select retailers around the world, including nike.com.

Be honest now, is there anyone that doesn’t like this boot? Sound off in the comments!

NIKE MERCURIAL VAPOR IX SE – 15TH ANNIVERSARY, 8.6 out of 10 based on 159 ratings https://www.footy-boots.com/wp-content/uploads/2013/05/Nike-Mercurial-Vapor-XI-SE-15th-anniversary.jpg

Written By
Kyle Elliot
More from Kyle Elliot
We bring you a selection of the niftiest football boots never to...
Read More