It seems when looking for inspiration for the inevitable Mercurial Vapor X, Nike’s designers got all misty-eyed and nostalgic looking back at past incarnations of their most famous speed boot and are keen on ensuring that legacy is honoured.

Earlier this year we had the Mercurial Vapor IX 98 SE that offered a literal reinterpretation of the iconic Blue/Silver/Volt Mercurials that the legendary Ronaldo wore in the 1998 World Cup.

Now, to see in another World Cup year, Nike have produced a subtler homage to one of the most revolutionary cleats in memory in the Nike Mercurial Vapor IX – Neo Lime / Total Crimson.

Off the bat, the colour is pretty much nothing like the 1998 Mercurials. We’d like to think that the Neo Lime fade into Blue is kind of a mash-up of the Blue, Silver and Volt colours that went into the original design, all melted into one stylish fade.

However, digging a little deeper and the callbacks to ’98 become just that little bit clearer. First off, the Mercurial branding has been altered to ’98M’ – indicating we’ll be seeing other years referenced in upcoming colourways. 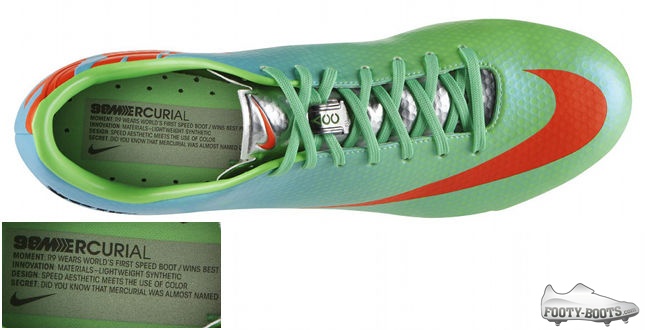 The insole also contains a mini-fact sheet on the boots, referencing the boots defining moment, tech and a little bit of trivia – in this case the the Mercurial was almost called the ‘Ultravelox’. Good save there Nike.

Additionally, it’s fun to note that the ‘innovation’ and ‘design’ are still aspects of the Mercurial Vapor that still ring true today – 15 years and 10 incarnations on. 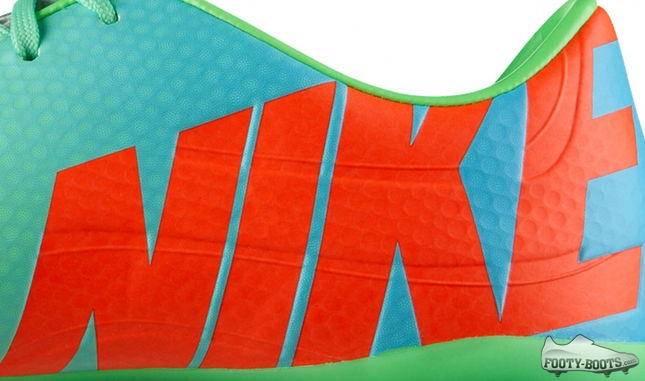 Topping things off is arguably the coolest tribute to the original Mercurial; the distinctive ‘waves’ of material on the original model are mirrored on the upper of the Mercurial Vapor IX – Neo Lime / Total Crimson, however, only in the Nike branding on the heel.

As for tech; you know the drill by now: Teijin synthetic with Speed Control Texture upper, two-density glass fibre soleplate and a soleplate designed for high-speed traction combine into a 185g beast of a cleat.

Your thoughts on this latest model? Leave ’em in the comments below.

Written By
Kyle Elliot
More from Kyle Elliot
Puma switch up the evoPOWER release colours for a darker take on...
Read More