After experimenting with Safari prints, asymmetrical stripes and bold colour clashes, Nike are boldly going where no boot has gone before on the new Nike Mercurial Vapor IX CR7 Galaxy.

The seventh signature colourway for Cristiano Ronaldo, Nike’s bold ‘Supernova’ all-over graphic is inspired by Ronaldo’s ‘out of this world’ play-style and limitless attitude towards football. 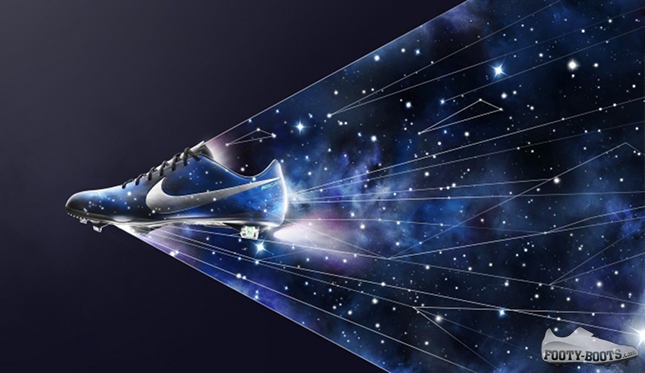 This edition of the Mercurial Vapor IX boot features an all-over digital print of the Star Vela Supernova and includes a seven star path print, paying homage to Cristiano’s shirt number. The supernova print is juxtaposed with a chrome swoosh dotted with silver fleck and a Blue Glow outline.

Technically, this is the same Mercurial Vapor IX you’ve come to know and love and – as is de rigueur for a Cristiano Ronaldo Vapor IX – favours the leather-like upper over the Speed Control Texture version. 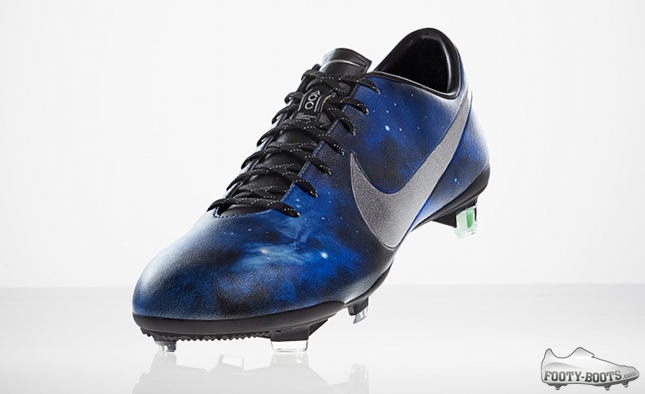 Giving an appropriate debut to such an incredible pair of boots will no doubt have been a concern for Nike. But, thankfully, there’s an el Clasico on the horizon in which Cristiano Ronaldo will debut his new football boots.

Set to hit the pitch on Saturday the 27th of October and available to pre-order on the Footy-Boots.com store now for a 7th of November retail launch, there won’t be many boots that match theNike Mercurial Vapor IX CR7 Galaxy for style and design this season

Speaking of style, the CR7 Mercurials come accompanied by a full lifestyle range that also drop at retail this week. As usual Nike have left no stone unturned, with training kit, luggage and caps available and a leather track jacket at the heart of the range.

“We were watching a game, and after Cristiano scored yet another amazing free-kick the commentator posed the question ‘Is Ronaldo from this planet?!’

When we got back to the design studio we got to thinking about CR7’s style and how similar it was to the definition of a supernova – a celestial body that radiates energy – and that was it, we had our inspiration.”–  Denis Dekovic, Nike Footwear Design Director.

“It’s great to collaborate with Nike. It gives me added confidence to know that they take my thoughts to create the best boot for me. In addition to the way the boots perform, it’s also cool when we create something that represents my personality and style of play.  It’s a very special relationship.” – Cristiano Ronaldo

Let us know what you think of the Nike Mercurial Vapor IX CR7 Galaxy in the comments below!

Nike Mercurial Vapor IX CR7 Galaxy, 9.2 out of 10 based on 2 ratings https://www.footy-boots.com/wp-content/uploads/2014/06/nike-mercurial-vapor-cr7-galaxy.jpg

Written By
Kyle Elliot
More from Kyle Elliot
Nike's new Vapor's are taking over pitches across the world - are...
Read More