As part of the marketing campaign surrounding the release of the new Nike Mercurial Vapor 4, football boot brand Nike will unveil a MV 4 Speed Test featuring some of English football’s fastest young players.

Filming took place last week in a secret location where the likes of Aaron Lennon, Theo Walcott, and Gabriel Agbonlahor were asked to perform a range of speed and skill tests in their new Mercurial Vapor football boots. 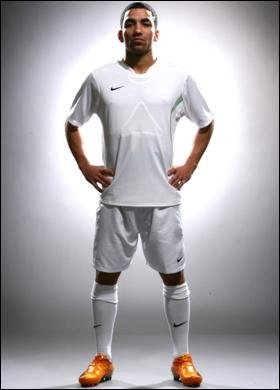 The MV4 Speed Test comes hot on the heels of the Nike video viral released last week, featuring Cristiano Ronaldo racing a Bugati Veyron in his new football boots. Ronaldo followed up his dash against the world’s fastest car, showing the power and accuracy of his MV 4’s, by notching a hat-trick in Manchester United’s 6-0 thrashing of Newcastle at the weekend.

The Mercurial Vapor 4 should prove a huge hit with the world’s fastest players and it will be interesting to see how the three English speedsters perform in the Speed Test. The core technical innovation of the MV4 is an ultra-light carbon fibre Speed Plate that reduces weight while providing maximum acceleration, strength and support to the player. The plate was adopted from Nike’s conceptual extremely lightweight?almost completely carbon fibre?Mercurial SL. The Speed Plate is so strong that its able to serve the dual purpose of providing torsion stability, for greater acceleration, and strength to protect the foot during hard kicks.

Stay tuned to Footy-Boots.com for more details on the Mercurial Vapor 4 Speed Test in the coming weeks.

Written By
Felipe
More from Felipe
With the football shirt industry booming, most clubs now see fit to...
Read More