Nike have dominated the conversation with the launch of two new football boots ahead of the summers big tournament; the Nike Mercurial Superfly IV and the Magista Obra.

With both boots bringing a raft of new technology to the fore – in particular, the first Flyknit uppers to be featured on a pair of football boots – there are a lot of questions about how the boot performs and what has pushed Nike in such an extreme direction with the design.

Thankfully, we had the perfect person to put those questions to in the form of Nike Footwear Product Director, Shawn Hoy.

FB: With so many synthetics proven for football on the market, why gamble on something new, like Flyknit

SH: I think for us, Flyknit was the technology that was going to allow us to accomplish our goals of really revolutionising fit and touch.

What Flyknit allows to do that other synthetics don’t, is to engineer down to the millimetre.

So, if you think about the midfoot as an example – the way a traditional synthetic would operate is it would have the same stretch properties everywhere.

And then certainly what Flyknot allowed us to do was to take the silhouette up into the Dynamic Fit collar, so it was just the right tool for what we were trying to do with Mercurial. 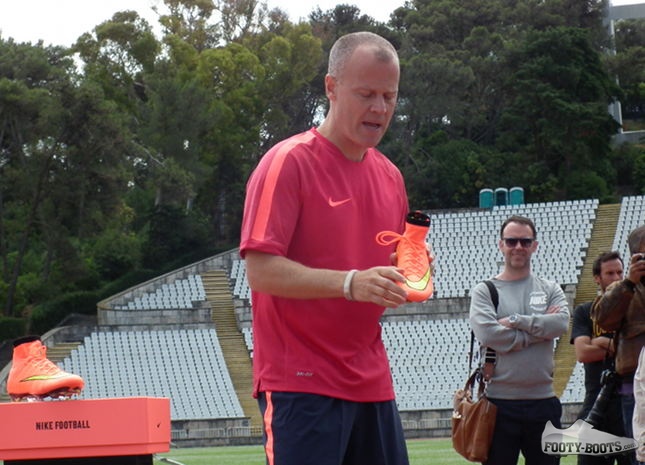 FB: We read a lot about the ‘Slingshot’ effect provided by the Brio cables when the boot was revealed; can you tell us a little more about that?

SH: So what I liken the Brio cables to is a five-point harness in a race-car. The Brios are really trying to deliver that lightweight strength and lockdown, and when you have that, that’s what enables efficiency of movement.

What we don’t want is an incredibly fast player having their foot move around in the boot, therefore making their movements ineffecient and slower.

We want to make sure they feel locked down – so that after that first step it does slingshot them forward explosively.

FB: Carbon fibre has been absent for the last two generations of Mercurial – why was now the right time to bring it back?

SH: What we’ve always liked about carbon is it is lightweight and very, very responsive; that made it a logical choice to bring back into the Superfly.

What we’ve been able to do this time that we really, really like is to go from three plies down to two.

So, again, we’re able to reduce a little bit of the weight and get the foot closer to the ground without compromising that explosive responsiveness – it just made carbon the best choice for this boot.

FB: Did you get any expected pieces of feedback from players who tested the Mercurial Superfly IV?

SH: So, when we would take these boots around in some of the early prototypes, one of the most encouraging experiences we had was giving the boot to players and  – as they would put it on – there was almost this sound of air escaping.

What we realised very quickly was that was your foot being locked in to the boot, and that was a sound we had never heard before. It was probably one of the best signals that we were on to a fit that we had never been able to deliver before.

FB: Were there any other fun anecdotes or pieces of feedback from players testing out the boot?

SH: Yeah, tonnes of anecdotes and tonnes of feedback – but overall I think what sticks in my mind after four years of development and working intensively with the players is, first of all, the aesthetic.

It’s something they’ve never seen before, nor did they expect to see.

But two, it’s the notion of the sock-like fit. It’s something that we never scripted, but the players actually played back to us – that’s when we knew we’d done something truly special.

When you can deliver something that’s never been seen before and players are telling you has a sock-like fit; that’s pretty remarkable. 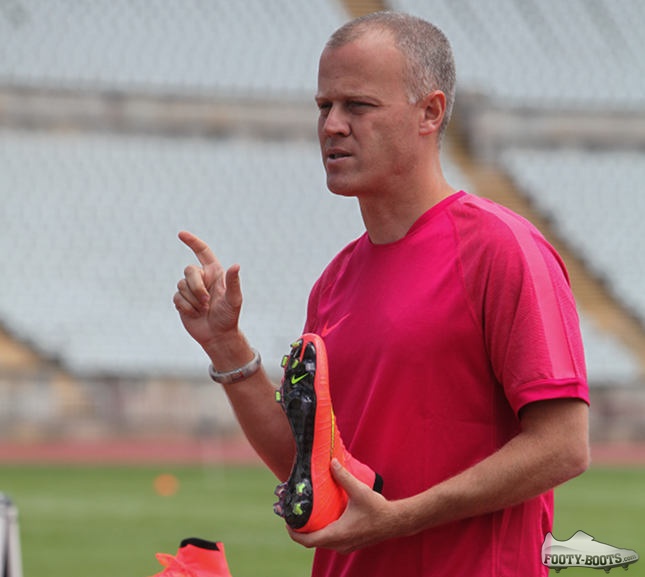 FB: What were the biggest design decisions made with the new soleplate?

SH: So, really what we’re after with Mercurial is that – if you go back to this player – we need to make sure this player is efficient and explosive in all his movements.

What we found in working with our sport research lab at Nike is that when players are slipping – they’re losing just that last few millimetres in this toe-off area.

So, what we did was we reenforced this toe area with extra studs as well as these teeth up here to make sure that last part of your foot that’s on the ground before you lift off is fully engaged to make your movement explosive.

FB: The Mercurial is one of the most iconic names in boots, with a lot of people having favourite models and colourways.

Is it tough to work on something with so much weight and expectation behind it?

On one hand, you have to pay respect to the heritage of Mercurial. On the other hand, we’d charged with delivering something that the world has never seen before.

We had a couple of different tools to work with in that respect; the silhouette was obviously a massive one in terms of changing the aesthetic.

But the Hyperpunch colourway was also one that – when we looked back at some of the iconic Mercurials – we had never delivered one in this specific colour.

We had done one in the Rosa colour, which everyone remembers from Cristiano Ronaldo’s hat-trick, but the Flyknit technology allows us to knit several colours together to deliver this Hyperpunch and that’s something we were truly excited about.

And then, some of the details which you’ll get into as you get a little closer to the boot – the reveal colours. Traditional synthetics don’t allow for this type of discovery and that’s something we were really excited about. 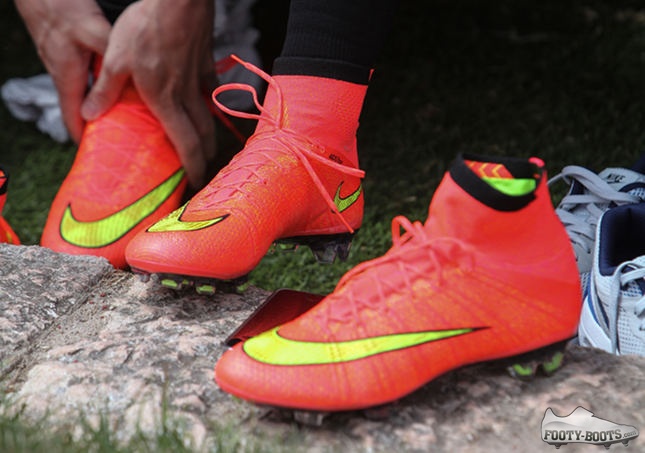 FB: Nike have given players two new boots to consider this summer; the Superfly and the Magista Obra. Why should one player choose one of these boots over the other?

SH: I think it comes back to playing style. We know for that Mercurial player; who is an explosively fast player, who is willing to edit everything away from the boot to enable that type of speed, they want the most minimal upper and they’re looking at bladed traction and a more responsive plate.

Whereas that Magista player, that playmaker, really wants something different. They want more texture in the upper for ball manipulation and control. Then, on the plate itself, that’s a player that rotates a little bit more as they’re typically in the middle of the pitch so they want conical studs.

Really, aside from the Dynamic Fit Collar, these two boots are actually quite different in their design specifically for those different players.

FB: Is Flyknit a technology we can look forward to on Nike boots for generations to come?

SH: Yes. But, at Nike we’re always innovating. We believe strongly in the promise of Flyknit, and I think really we’ve only scratched the surface of it’s potential, but we’ll always hunt down the best way to make boots based on the ever-changing insights that we get from the game.

But overall, we believe that Flyknit has an incredibly promising future.