Just because the Nike Mercurial Superfly IV is one of the most tech-packed, outrageously-designed pieces of footwear ever to grace a pitch doesn’t mean you have to shout about it.

And if you’re one of those sorts of players that likes their footwear to be brimming with features yet understated in design, you’ll love the alternative launch colourway for the new Superfly IV .

Swathed over in almost all back, the new Mercurial looks positively lethal; the FlyKnit and Brio cables rippling underneath the black ACC coating like something from a sci-fi film. 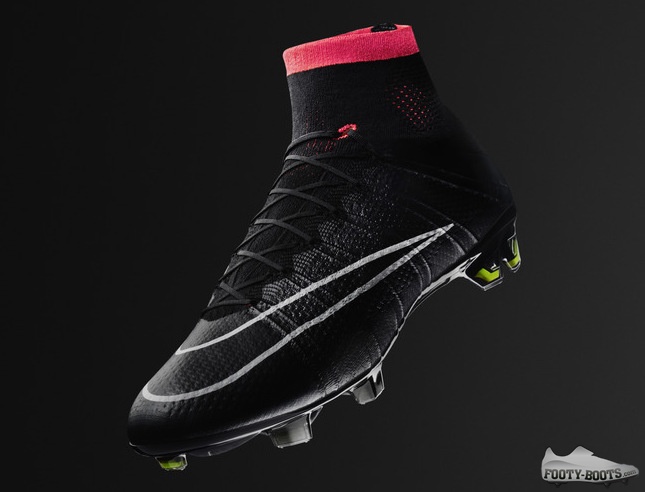 At the cutting edge of boot technology, the Nike Mercurial Superfly IV has a spectacular feature set.

The upper is a three-weave FlyKnit material created specifically for football, that Nike say gives an incredible sense of feel on the ball.

The material works it’s way up the boot, replacing the traditional tongue with a Dynamic Fit Collar (capped off with a Hyper Punch trim as a nod to the lead colourway) for a truly exceptional sense of fit and comfort; enhanced by the integrated Brio cables that act like a jacked-up version of the FlyWire from the older Superfly.

And that all-black upper naturally looks killer with the Carbon Fibre soleplate.

Re-engineered from older models, the new chassis is more flexible and comfortable than previous editions for a more dynamic and responsive ride.

The new stud placement also makes for assured traction in the final 10% of an athletes stride for improved acceleration.

Which of the two colourways we’ve seen so far would be your weapons of choice?