Nike has released its most innovative and lightweight football boot ever: the Nike Mercurial SL.

The product brief for the Nike Super Light (SL) was to create a football boot with no design or financial limitations. Taking money, time and manufacturing considerations out of the equation, Nike set about producing the lightest, fastest football boot possible.

The Nike SL weighs only 190 grams and is made almost entirely of carbon fibre. Something which, until this point, had never been done before. The Nike SL is being marketed as the football boot brand’s most lightweight, most highly responsive yet flexible and strong football boot to date. A football boot featuring only what’s needed without giving up any performance.

Initially designed in the style of a concept car: to lead innovation, to drive new ideas, to push the boundaries in design and engineering, the development process for the Nike SL took 3 years, spanning four continents. 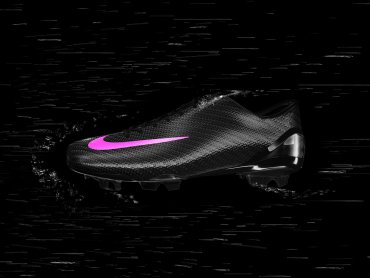 The Nike SL has been specifically designed to cater for the fastest football players, and as such will be primarily sported by Chelsea’s Didier Drogba and Manchester United’s Cristiano Ronaldo. As a limited edition football boot, it is likely to become one of the most sought after football boots on the market. Only 2000 pairs of the Nike SL have been produced and each pair will set you back a cool £239.99.

For the plate, Nike worked with a partner in Germany to create a 7 layer carbon composite material interwoven with TPU and polyurethane to maximize the material. With no lasting board, the structure is in the plate itself. The construction gives the player torsional stability to offer greater propulsion across the field. The foot is closer to the ground, giving players a smooth ride. A reinforcing rib adds support to the foot, increasing impact resistance and preventing reverse bending during a hard toe kick. The carbon fibre is woven together at angles to provide the most flexible, lightweight, foot-fitting support without sacrificing strength. 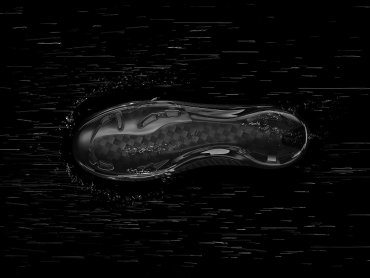 In Korea, cleats and stud tips were injection moulded on to the plate, creating a single outsole piece. The traction of the cleat is built for a fast athlete, allowing for quick acceleration across the field with or without the ball. The Nike SL has a minimized heel bucket keeping the heel in place.

In Montebelluna, Italy, at Nike’s Research Centre, engineers created a new process enabling them to mould the carbon fibre into a soft performance upper for the football boot. 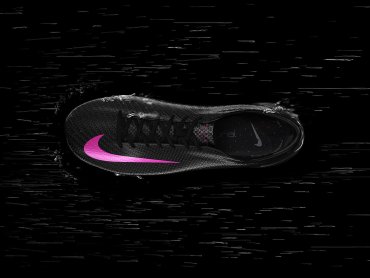 The black aesthetic of the football boot is dictated by the colour of the carbon fibre. The pink Swoosh is the only added element. “It invites you to take a closer look so you’ll see the detail and the beauty of the football boot” explains Nike designer, Peter Hudson.

He goes on to say: “With the Mercurial SL, we’ve truly delivered on a promise – as a lightweight, high performance football boot for acceleration, the Mercurial SL sets a new standard not only for football performance, but as a conceptual product without limits – a product based entirely on a vision. We created a new design and aesthetic vernacular for football.”