In 2004, Nike’s engineers and designers set out to create a ‘concept boot’ that would change the way football boots could be built. Removing every boundary that typically influences a football boot’s development, including time, budget and materials, the result was the Nike Mercurial SL.

The Nike Mercurial SL is a 185g carbon fibre football boot, the lightest, fastest boot ever, designed to cater for the fastest players on the planet, including Didier Drogba and Cristiano Ronaldo. 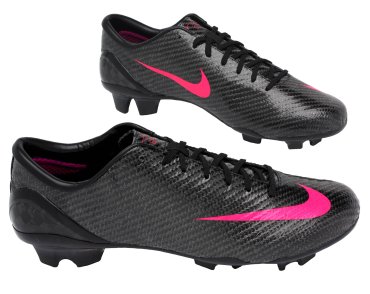 From the initial brief through to final construction, every aspect of the Mercurial SL football boot’s development was undertaken without the traditional limits and barriers which surround most other products. This ‘no limits’ spirit also informed the way that Nike tested the Mercurial SL. In addition to testing on the football pitch, Nike wanted to test this product in unconventional ways.

What better way to test super sonic speed than to have the world’s fastest man – Asafa Powell – see how fast he can run in the Mercurial SL boots? So, Nike asked Asafa to trade in his world record setting track spikes for a pair of the Mercurial SL boots to see how fast he could run the length of a football pitch. In the Nike Mercurial SL video viral which you can see on Football Boots TV now, Asafa clearly receives the benefit of these boots and clocks a supersonic time. Asafa then sends a message with the boots as they are transported across the Atlantic to Chelsea striker Didier Drogba at home.

Written By
Felipe
More from Felipe
Arsenal overcome Celtic in leg one of their Champions League qualifier thanks...
Read More