With the Mercurial Vapor VI’s price point being raised, chances are many people will be looking to the Mercurial line’s sibling football boots! 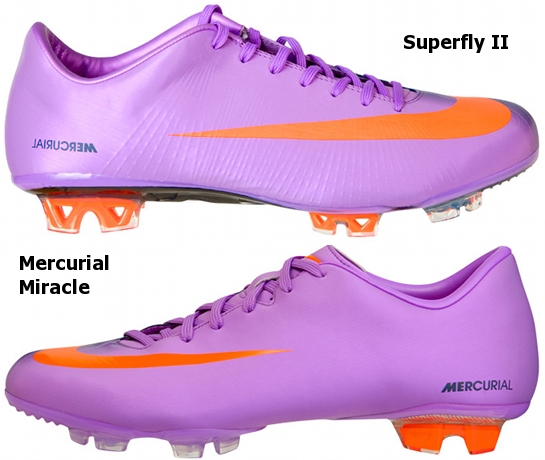 And the top of the these sibling boots is the newly-named Mercurial Miracle.

So what can we expect from this new incarnation?

Well, Nike tell us that the Miracle is cut from the same ‘last’ as the Superfly II. The ‘last’ in the football boots production process is essentially the shape that the boot is cut from.

So, coupled with the fact that the upper is made from Teijin synthetic Microfibre, you know that the upper on these boots is neigh-on the same as the Superfly II in terms of shape.

Another stand-out feature of the Miracle is the heel section. Developed to be completely separate from the rest of the sole plate, this part of the boot is made from the same ultra light glass-fibre that you would find on the sole of the Vapor VI.

In addition to that, this section of the boot uses the same direct-injection process to produce the studs as the Superfly II and the Mercurial Vapor VI, just without the hollowed out section.

As for the front of the sole plate, this is more like the ‘classic’ single piece sole-plates of the earlier FG models of the Mercurial Vapor series, such as the MVII & MVIII, made of a single-injection TPU.

Two features that the Mercurial Miracle lacks over it’s more expensive models is the NikeSENSE stud and the Flywire tech in the upper.

One advantage that the Miracle has over the Superfly or Vapor is the high-availability of the Artificial Ground sole-plate, so if you ply your trade on Artficial Grass you might well opt to get these over the Vapor!

Release: Out now Rate it: