The image of the Manchester United Team in their shiny new Nike Home Kits interests us at Footy Boots not for the shiny new kit (with its new collar, tail detailing and premiership badge) but for the football boots worn by the assembled Man United players. 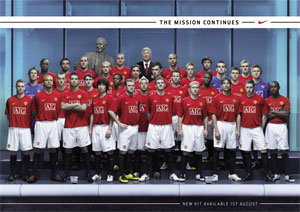 Rooney leads the line in his yellow Nike Total 90 Laser football boots – even though he prefers to wear the white / black colourway for actually playing in. The yellow Nike T90 Lasers are dotted around the team, along with the white, indicating the impact the new football boot have made already on professional players – including Paul Scholes, normally a Nike Total 90 Supremacy wearer. Cristiano Ronaldo is finally out of his white Mercurial Vapor III, and is wearing the new dark blue colourway. Interestingly Ryan Giggs is not in Reebok Sprintfits, but in his old Reebok Pro Rage, possibly indicating the age of the photo. For Team Adidas, we have the standard Adidas Predator Absolute Power football boots, with no showing of any new Predator colourways. The most intriguing feature is Michael Carrick, long-time Puma football boot wearer, wearing Nike Air Legend football boots! Is this a new signing for Nike, or simply a case of Carrick being added into the photo at a later stage?

The names of a few of the players have us stumped here at Footy Boots central, many of them looking like rejects from a police line-up, so any readers want to pitch in and let us know the names and football boots of the fringe players in the picture, feel free to tell us the score!!

Click here to see a larger image of the Nike Manchester United Team.

The front of the home jersey features an engineered mesh pattern inspired by the architecture of Old Trafford & the contours of the body. On the back of the jersey a flash of white tape frames the name & number with a fine black stripe, MUFC and the Red Devil emblem inside. As a final touch there is a label with the Red Devil emblem and the nickname “The Red Devils”. White shorts and black socks complete the new home kit.

The kit has been made using Nike Dri-FIT fabric. Nike Dri-FIT garments sit next to the body and transport moisture away from the skin to the fabric’s surface for rapid evaporation, keeping the athlete comfortable for longer. Moisture management is achieved through several mechanical fabric construction methods. The fabrics are designed to move excess moisture away from the skin and spread it out over the large surface area of he fabric face so that it can quickly evaporate.

The new Manchester United Home kit will be available from 1st August 2007.