Nike are using the biggest athletes in their stable to issue the ultimate challenge to football players the world over in 2012: Whatever you do, Make It Count.

Kicked off by Cristiano Ronaldo on New Year’s Eve, the Portuguese became the first superstar to make his pledge tot the #MakeItCount campaign with this tweet: 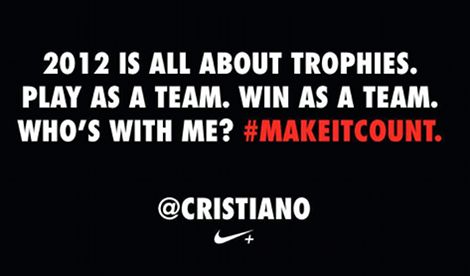 Since then, Nike have been gathering their top stars to pledge how they will #MakeItCount over the next twelve months.

Given the Twitter-Centric message of the campaign (likely to help promote the brand’s new @Nike account), who better to appear in the first #MakeItCount video than Rio Ferdinand?

The big defender has won the Premier League, the UEFA Champions League, the League Cup and even the FIFA Club World Cup in his tenure at Manchester United – so how does the England International aim to better that in 2012?

In this latest video from Nike Football, Rio tells us that the idea of looking back on a legacy – of trophies, honours and great victories – are what keep him motivated. 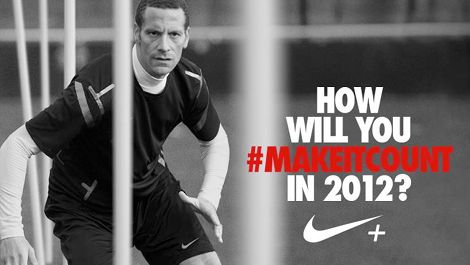 The most interesting part of the campaign, however, comes on the homepage where Nike say they will make a ‘game-changing’ announcement on 19.01.12.

Given the prominent use of both the Nike+ logo and their footballing product ambassadors, there’s a lot of speculation on what they could be bringing to the table.

We’ll have all the details on the 19th, but until then – we want to know what you think Nike’s big announcement might be…!

Give us your best theories in the comments!