Since the big reveal in March, Nike’s Magista Obra has been raising questions and pushing boundaries in football boot design in a number of exciting ways.

The first Nike release to feature FlyKnit, a lot of people wondered about the viability of the use of a more sock-like ‘knit’ used on the upper, posing issues on durability, maintenance and protection.

But with the boot having been aired out on a number of professional pitches, including the Champions League final and the World Cup by the planet’s best players, it’s now the turn of us mere mortals to slip our feet into these revolutionary football boots.

Taking a fresh pair of Magista Obra’s out of the box is unique in that you’re immediately drawn in to every facet of the boot’s construction. The Dynamic Fit Collar is exactly what you’d expect; soft and stretchy, this is essentially ‘raw’ FlyKnit.

This extends to the patch underneath the laces; Nike have obviously deliberately left this part of the boot ‘pure’ so it can accommodate a number of foot widths and and shapes, ensuring that the Obra cab stretch and give for a truly bespoke fit.

But aside from these two areas of the Magista, people expecting the whole boot to be more of the same might be in for a bit of shock; the Magista Obra packs a lot in to its upper. 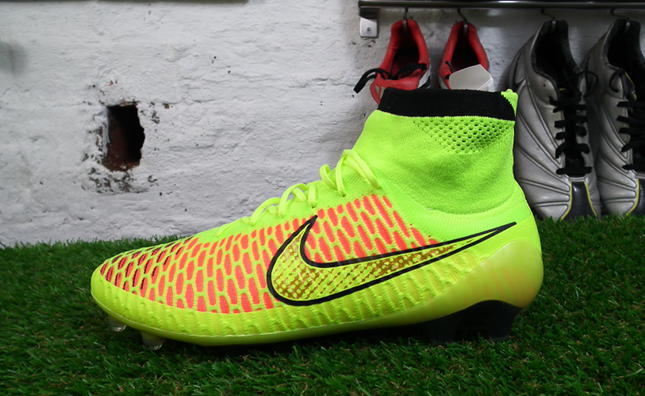 Starting on the outside, the Honeycomb-like structure is a widely-spread type of external reenforcement that serves a multitude of purposes; adding shape to the boot, working with the laces to optimise fit, and adding friction to the upper for feel on the ball, all whilst still remaining flexible.

Looking closely, you can see where the NikeSkin layer begins and ends near the laces; this application on top of the FlyKnit construct waterproofs this lower area of the boot, and allows the addition of the ACC All Conditions Control finish for consistent feel in all weather.

On the inside of the boot, there’s even more going on; the only unfinished section of FlyKnit is on the instep of the boot, allowing the Obra to hug this area of the foot that’s vital for passing. 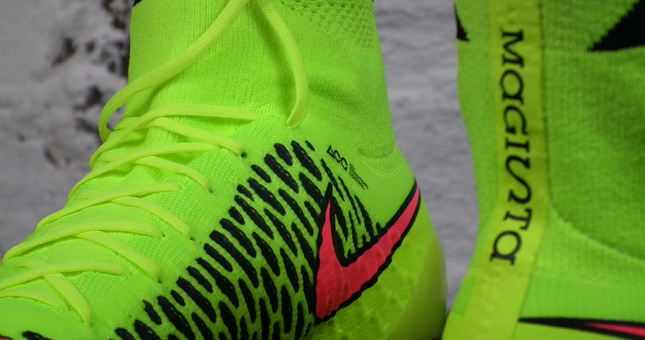 The rest of the interior, however features a distinct second inner layer that pads the boot on the lateral side and toes for protection and a little bit of bulk to the upper.

Looking to the sole of the boot, and Nike have continued the philosophy they started on the CTR360 III; players in the middle of the park make smaller, adjusting movements and need to rotate quickly to find that killer ball to their team-mates as well stability that breeds the confidence to sweep in crosses and free-kicks.

To support that, Nike have a Pebax and Nylon outsole that relies on conical studs to provide traction, as well as some oblong braking studs for dropping the anchor to buy a couple of yards. 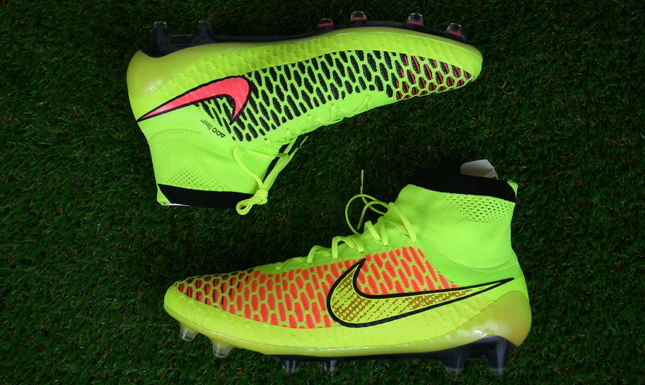 With all that said, the Magista offers up an exciting new approach to the now-stalwart to Control-focused football boots.

Rather than tacking on external rubber areas or padding to help control the Nike Magista Obra is more stripped down to give a purer, more natural touch on the ball, with the NikeSkin portion of the design more augmenting the foot’s abilities than trying to enhance them in any great way.

We’re massively looking forward to trying them out fully soon, an exploring how they hold up in wetter weather, on artificial turf and how they compare to the Superfly IV.