Nike promised that football wouldn't be the same, and now with the launch of the Magista range it seems like a that wasn't an empty threat!

This brand new range from the swoosh replaces the CTR360 range and brings in some exciting new technology spread across four new boots – get comfortable all you creative-players, we're running through the full range of Magista football boots starting at the top. 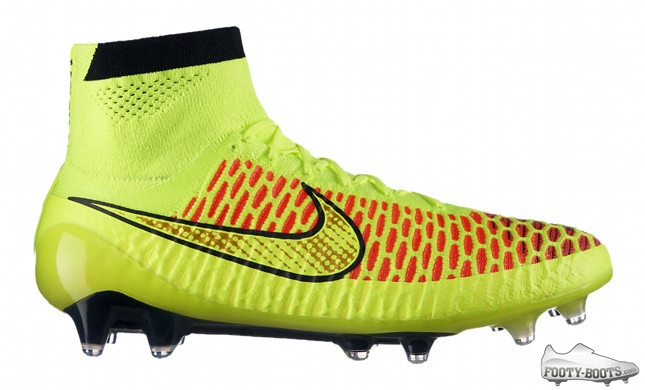 And the top is the Nike Magista Obra.

This is a pinnacle or elite tier boot and will be the most expensive in the range by some margin – think what the Superfly was to the Vapor 5,6 and 7 or the Elite version of the Tiempo Legend IV was to the regular version.

The Magista Obra's upper is Dynamic Fit FlyKnit in the under-layer that creates a sock-like fit and is engineered to mould to the foot. The honey-comb like upper layer is NikeSkin which we've seen on the Hypervenom, bolstering that FlyKnit and offering touch and friction on the ball with an ACC coating.

Midsole comfort comes courtesy of a textile sock liner that mirrors the foot shape for a low profile ride and the compressed nylon and pebax outsole uses a hypervenom-esque soleplate to enhance rotational agility.

The next tier is – the Nike Magista Opus – a statement level boot that carries over many of the design principles as the Obra.

You won't find any flyKnit, though – the Opus instead uses a combination of Performance mesh, Kangalite and Nikeskin with an amplified texture finish to create a similar effect to the Obra, but without the Dynamic Fit system provided by the FlyKnit.

The rest of the boot is the same, however, with a near-identical mid foot system and the same compressed Nylon & Pebax outsole used to create an agility enhancing soleplate.

The Nike Magista Orden actually offers a similar package to the now-old CTR360 III with a liberal use of top-quality materials used for a mid-range boot.

The upper is surprisingly Kangalite and does away with the two-layer system used by its two older siblings. This single-tier Kangalite does boast an texturing similar to the the Opus and Obra, so still offers a great touch on the ball that might actually feel better to some players who don't like the idea of two layers.

The midsole system is once again, but the soleplate is constructed differently; this time using a slightly stiffer TPU base with directly injected moulded studs. That said, the Orden is the point in the range where FG, SG, AG and Astroturf models will be more widely available if you play on a variety of surfaces.

The Magista Onda once again swaps out the upper material, opting for what nike describe as a €Trophy' synthetic that wraps the foot for a soft, forgiving fit whilst still offering a great level of protection. You'll also find this version continues the trend of a textured upper following that distinctive honeycomb pattern for an enhanced ball feel.

The mid foot is a die-Cut EVA sockliner that isn't as plush as it's bigger brothers, but still provides enough cushioning to help the boot deal with a variety of surfaces.

Rounding out the range is the Nike Magista Ola. This boot is set to be only available in certain regions and will mostly cater to junior footballers, so it obviously clocks in at the lowest price-point, with the largest variety of sizes, and greater range of soleplates making them a great option for pick-up games.

The upper is again a trophy synthetic leather, but this time the texture is only a screen-print meaning there's no enhanced feel outside of the synthetics natural properties.

The soleplate uses a combination of conical and oblong studs and is the same as many other of the entry-level Nike boots you'll find at this price-point.

That wraps up our look at the new football boots in the Nike Magista range. Are any boots better than you thought they’d be?

The Opus and Orden are definitely two of the most exciting take-downs we’ve seen, for sure – but what do you think?

Written By
Kyle Elliot
More from Kyle Elliot
The Footy-Boots.com Weekend Review returns for it's penultimate outing of the season!
Read More