The new Nike Magista 2, a design that emphasizes evolution in touch and traction.

After reading research around evolution and morphology, I was interested in the hypothesis that pruning hands were an evolutionary development for maintaining grip on wet surfaces and tools. That got me thinking about how the foot might have adapted had its primary purpose been football.

Accordingly, for the Magista 2, Woodman reimagined the original Magista silhouette — a design that, with its mid-height collar and Nike Flyknit technology, changed the look of footwear and redefined feel and touch on the pitch — to further the boot’s tactility and tighten the gap between the brain and ball.

We were focused on sensory amplification through feel. By delivering a better feel for the ball, players are able to confidently create on the pitch without distraction. 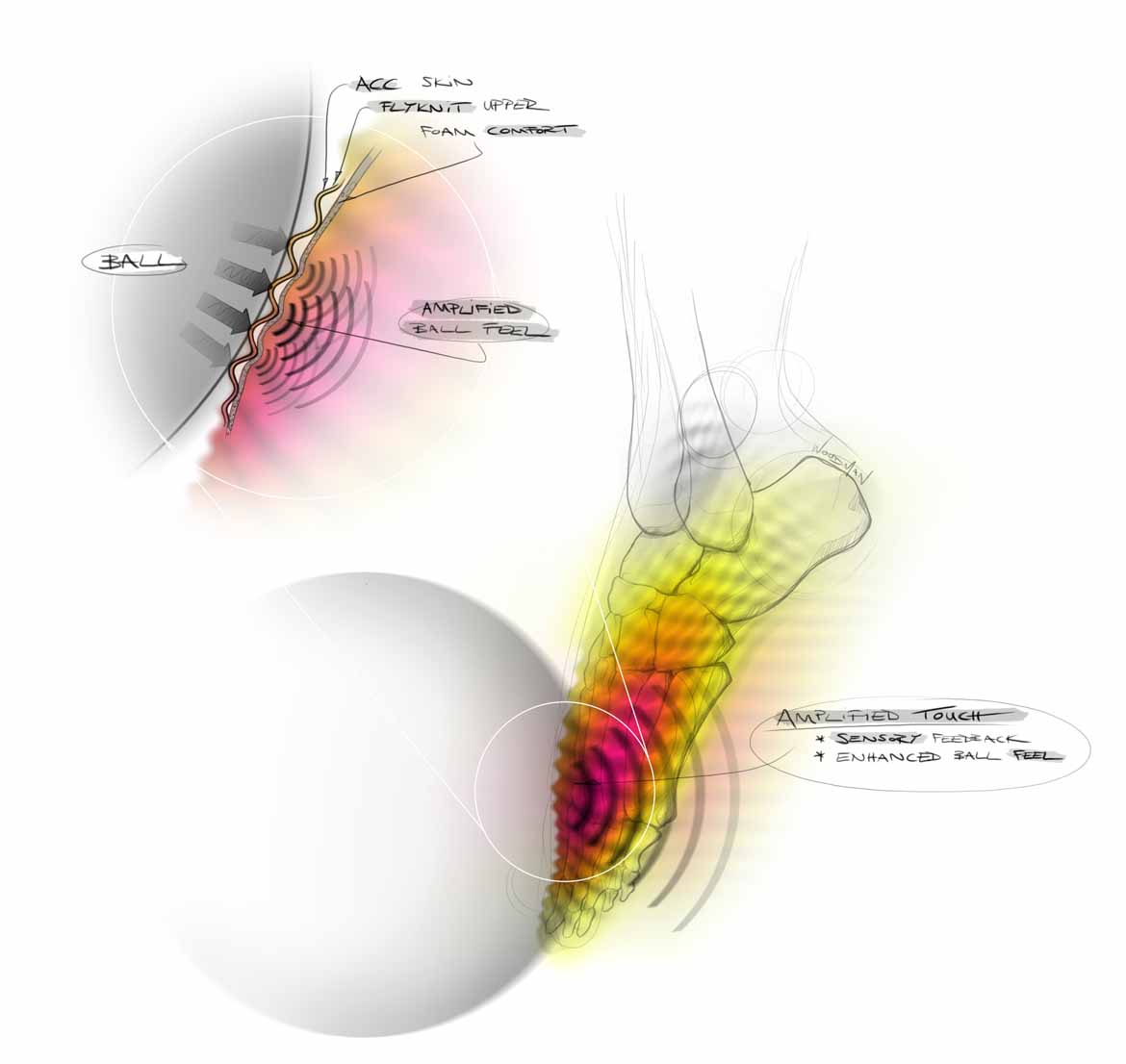 Woodman worked with the Nike Sports Research Lab to define which parts of the foot are most sensitive to touch and mapped those against high-touch zones gleaned from slow-motion film study of ball control. The data collected in this research was visually applied to a foot model in the form of a heat map, revealing significant overlap in areas of high sensation, effectiveness and engagement. 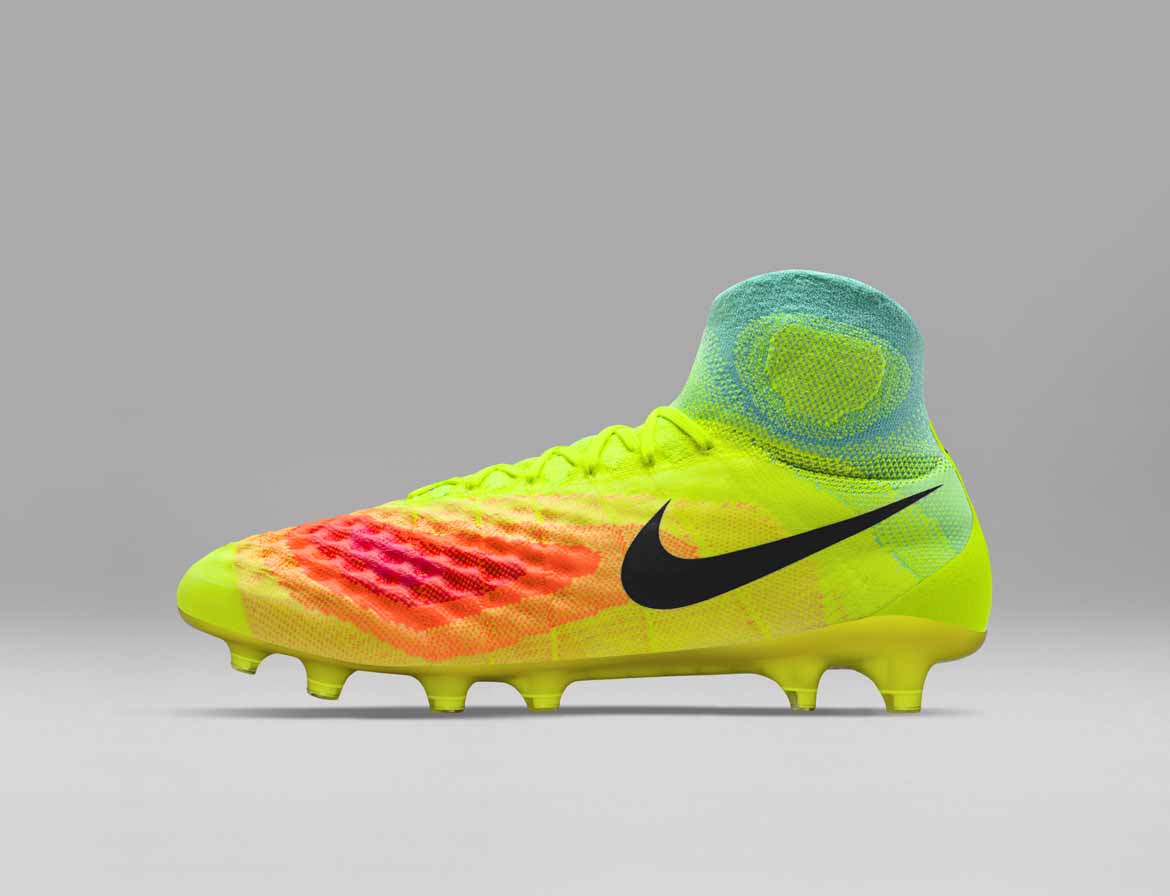 Equipped with this information, Woodman began 3D printing test uppers featuring peaks and troughs of varying dimensions. This was a marked transition from the upper of the original Magista, which was uniform throughout.

We envisioned the upper of the Magista 2 performing as an organic extension of the foot. The texture is podular and cushioned, designed to communicate with a player’s sense of touch when the ball comes in contact with it.

The peaks and troughs on the upper utilise the same amount of materials as the original Magista through the use of negative space. The highest peaks (4.5mm) are in the premium touch areas, aligned with where the foot should come in contact with the ball. 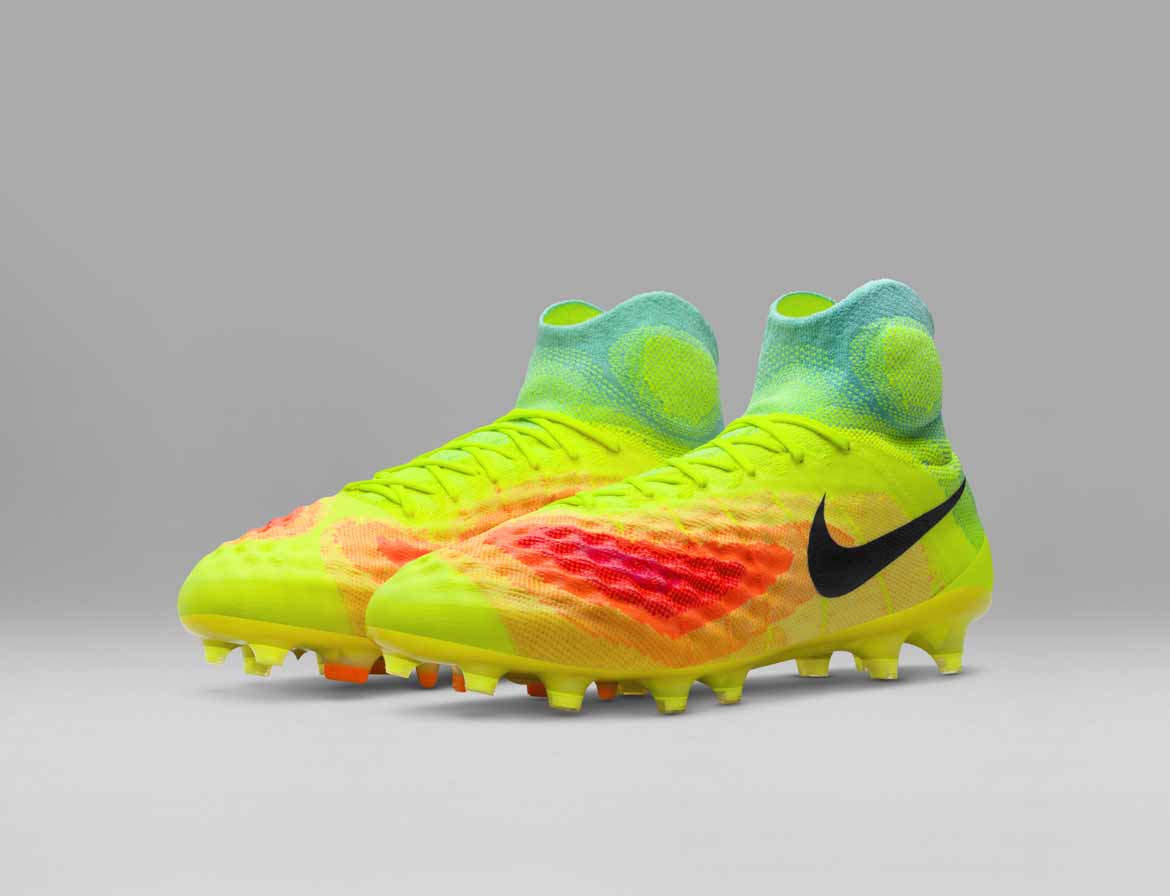 This is the next step in the application of Nike Flyknit. The pixel precision of Flyknit makes it possible for us to create dimension without adding weight or overlays. We used to build texture atop the upper, now the upper itself is textured. 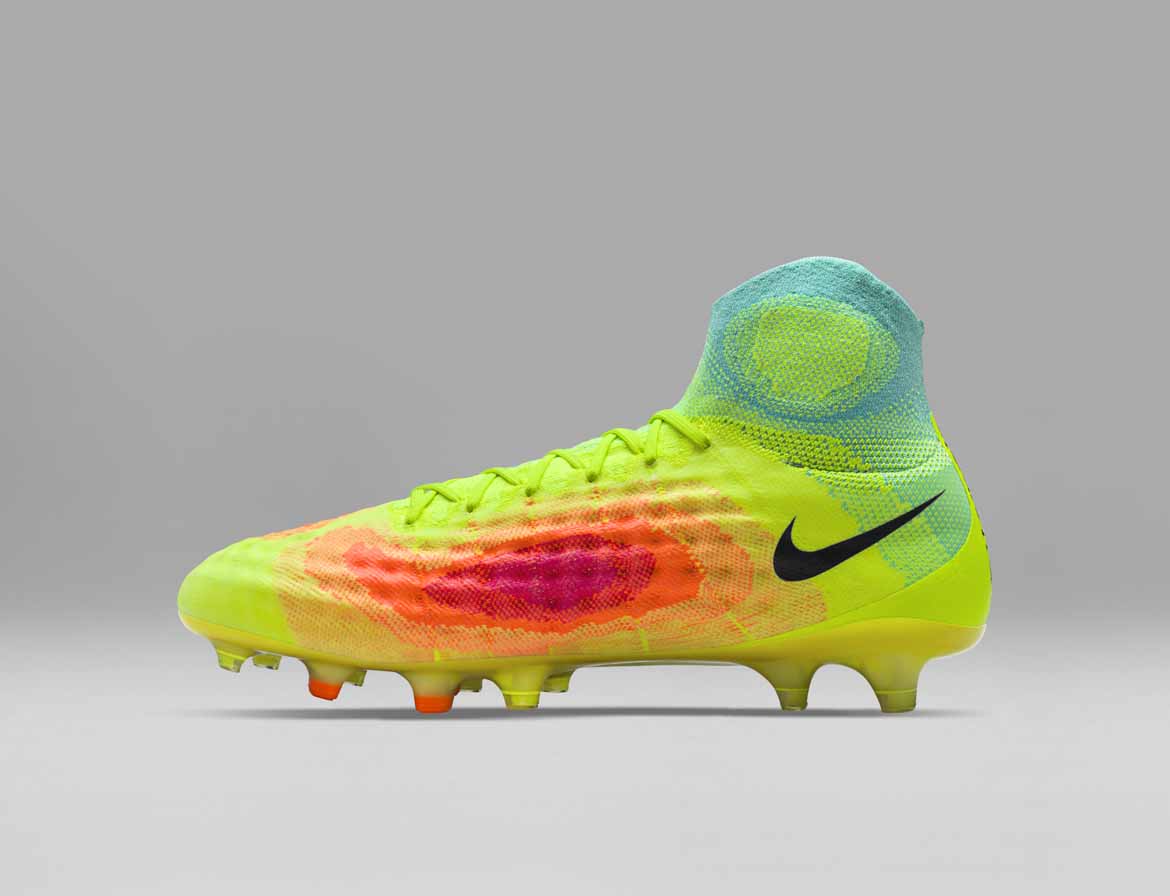 These developments are also seen in the more anatomically contoured Dynamic Fit Collar, designed to accommodate the shape of the ankle bone while leveraging a thicker knit structure for additional coverage. The revamped collar also dips lower on the tendon for comfort. The tongue-less solution now features light padding under the laces for coverage in this high contact area. 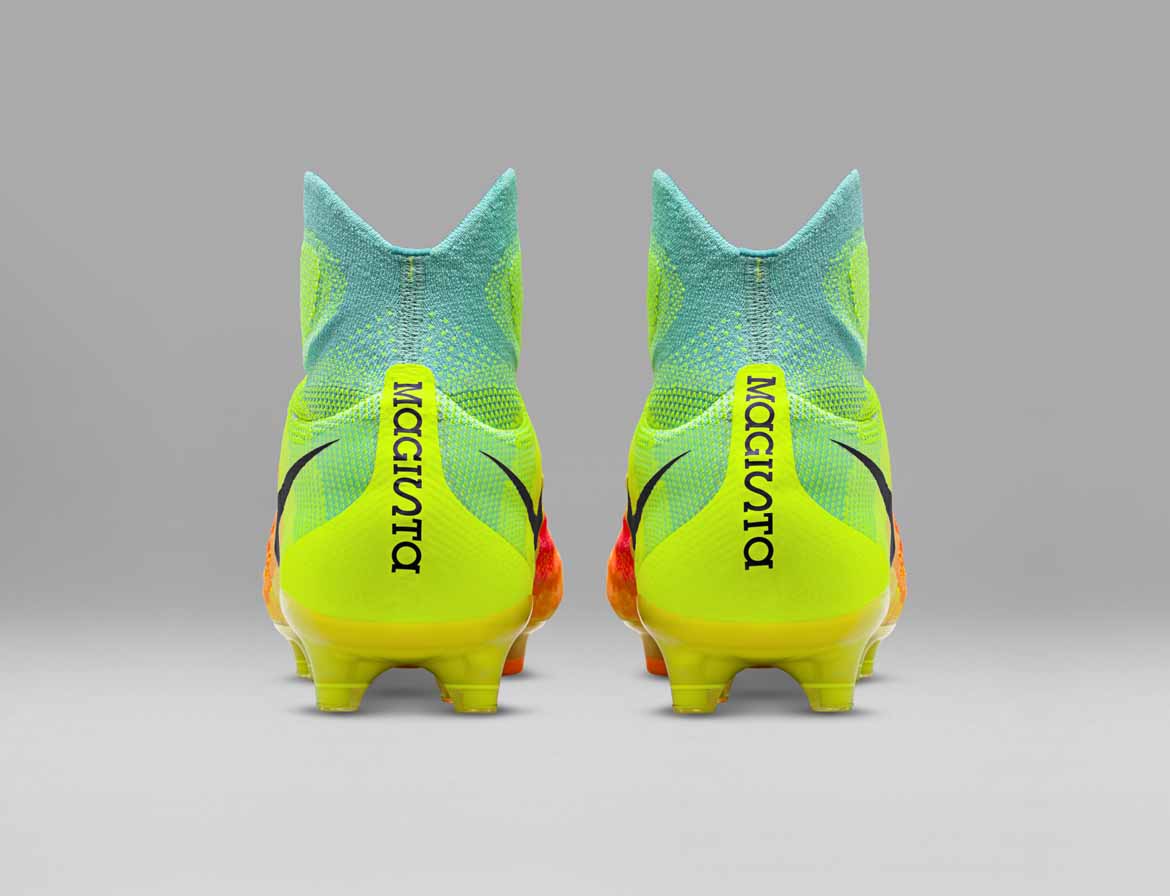 For a more secure fit, the Magista 2 leverages an internal heel counter for enhanced lockdown. The Nike Grip sockliner further enhances in-boot stability and is part of the boot’s overall traction system.The stud configuration of the soleplate has been completely revamped through Finite Element Analysis (FEA), which takes the guesswork out of traction patterns via scientific testing of the optimal pattern per style of play. “The science that has gone into the traction of Magista 2 is truly a differentiator,” proclaims Woodman. “This boot makes a traditional conical pattern seem like black-and-white television. Players noticed the difference right away and responded very well to it.” 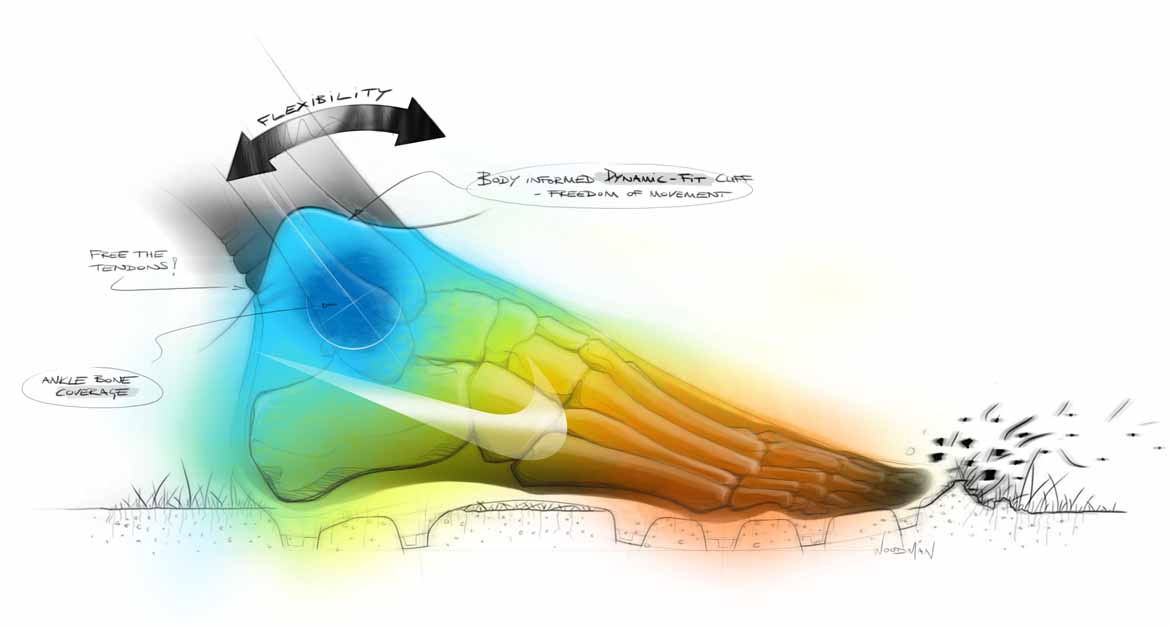 The key to the new traction pattern is not how a particular stud performs individually, but how the configuration interacts as a complete system. The emphasis on foot rotation for Magista players led to the chevrons around the ball of the foot, directly aligned with the FEA data from Nike’s Sport Research Lab (NSRL). There are also medial and lateral half-conical studs designed for acceleration, as well as heel plant and braking studs positioned by data. The soleplate housing the advanced traction system is significantly lighter than its predecessor: 60g as opposed to 85g. 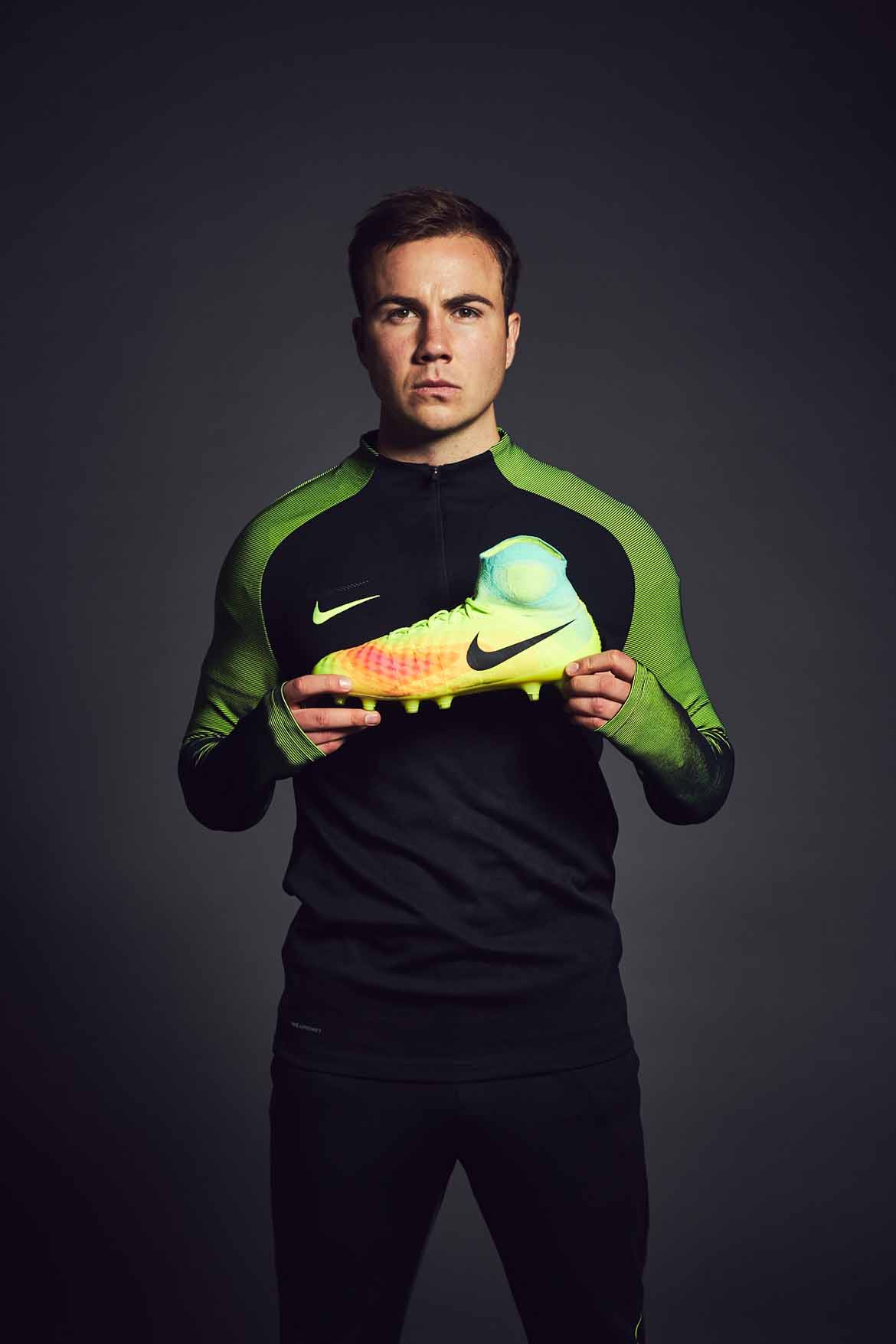 The fluid colors adorning the Magista 2 reflect not only the heat map that guided its design, but also the smoother transitions throughout the boot’s upper, especially from collar to foot.

Written By
Michael D
More from Michael D
Umbro release the Republic of Ireland Home and Away kits for Euro...
Read More