With the reveal of the Nike T90 Laser IV not far off on the horizon, we’ve seen a handful of players who prefer the T90 series being selected to try out blacked-out versions of Nike’s latest football boots ahead of the release, but it looks like Nike are also testing the water with non-T90 athletes, too. 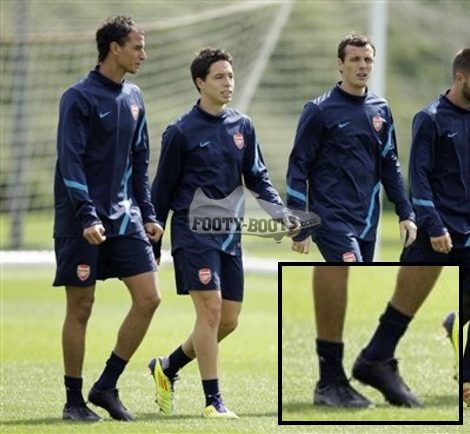 As is the case with Marouane Chamakh, who played out the duration of Arsenal’s training session today in blacked-out versions of Nike’s latest Power/Accuracy football boots.

During a light session ahead of tomorrow night’s clash with Udinese, the Gunners forward was spied from the sidelines ditching his usual Mercurial Vapor football boots for the chance to play in the Nike T90 Laser IV.

The move would certainly come as a shock to anyone that’s familiar with Chamakh’s boot-history; the French-born striker has been a huge advocate of the Mercurial line since rising to prominence with Bordeaux in the last few years.

Moroccan International Chamakh has even been known to occasionally break out some classic Lime Green Mercurial SL’s in training from time-to-time!

But Chamakh’s stock has been falling of late, and with Arsenal now having relinquished Cesc Fabregas to Barcelona, it’s time for the 27-year-old to stand up and be counted; and who knows a change of football boots can sometimes bring a change of fortune! 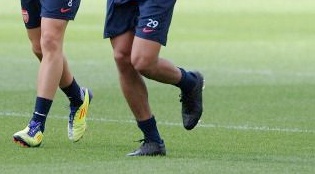 Given Nike’s heavy ties with Arsenal, it would certainly make sense for the American brand to want to have a member of the squad in the new Nike T90 Laser IV. With Walcott, Gervinho, Arshavin and Bendtner in the Superfly III and Wilshire, Szczesny, Gibbs and Song in the CTR360 II Nike will likely want a key player in the new Lasers when they launch!

Do you think this hints that the new' Nike T90 Laser IV will also be suitable for players who value Speed?

Is Chamakh a good fit for Nike’s latest football boots?

Written By
Michael D
More from Michael D
We caught up with Yohan Cabaye and his brand new Visaro 2.0...
Read More