It has to rate as one of the biggest shocks in Champions League history.

The Kings of Europe, unbeaten in the competition this season and with six wins out of seven and one draw in La Liga, going down at home to the tournament newcomers.

But that is exactly what happened at the Nou Camp last night as Barcelona were humbled by Rubin Kazan of Russia.

Added to that, the man who scored the winning goal is something of a Nike football boot journeyman. 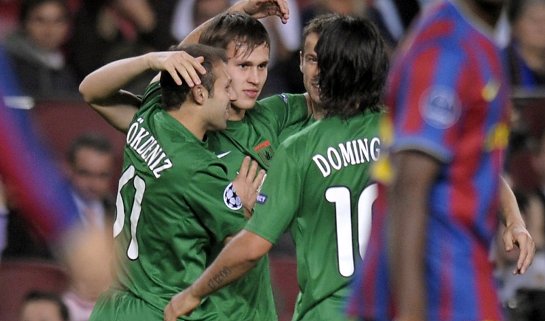 Karadeniz (left) enjoys the win at the Nou Camp

Chances are that not many people will have Gokdeniz Karadeniz in their Champions League fantasy teams but he might feature more heavily now after he finished off a superb breakaway move to stun Barca as the visitors completed a 2 – 1 victory.

Karadeniz wore the Nike Vapor SL last night, the Citron / Charcoal / Silver boot matching nicely with Rubin Kazan’s all green strip. But looking back at his choice of footwear over the past year or so, it’s clear that the Turkish international likes to swap around. Back at the end of September, he turned out in the Vapor V Max Orange / Abyss / Silver colourway for the Champions League encounter with Inter Milan while his boot of choice towards the end of the Russian league campaign was the Nike Vapor III.

For the record, Karadeniz joined the Russian champions in March 2008 from Trabzonspor for around 8.5 million. At the time, he said he was looking for a club that could offer him greater chances on a bigger stage. Last night, he took that chance with aplomb to send shock waves around Europe.

Indeed it was a night of surprises in Europe with 31 goals scored in the eight matches. In Group E, Liverpool were beaten at home by Lyon while Fiorentina won a thriller away to Debrecen 4 – 3.

Sevilla have already qualified from Group G following their 3 – 1 win in Stuttgart and Rangers embarrassing 4 – 1 home defeat by Unirea Urziceni.

Arsenal have had their lead at the top of Group H cut to just a single point after they conceded a late equaliser away to AZ Alkmaar with Olympiakos now the London side’s main challenger after a 2 – 1 victory against Standard Liege.

And Inter are bottom of Group F after they were held to a 2 – 2 draw by Dynamo Kiev. Barcelona are still top despite their surprising defeat.

Written By
Felipe
More from Felipe
In this week's 'From the Sole', Footy Boots contributor Kyle Elliot does...
Read More