Today is the day that 2012 lucky football boots fanatics will be either heading to their local Niketown or eagerly awaiting the postman for the arrival of their Nike GS – and to whet appetites even further, we went hands-on with pair ‘0000’ to see what the GreenSpeed has to offer… 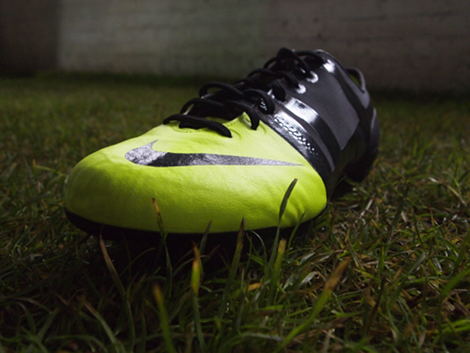 In the bright sunshine of the Olympic football competition, the Nike GS‘s highlighter-yellow upper didn’t really give the same impression as it does in person. The contrast to the black of the Nike tick and all-black midfoot and heel give it even more ‘pop’.

The segmented look given by the reenforcement provided to the midfoot by the laminate-looking material offers the GreenSpeed a completely unique aesthetic. 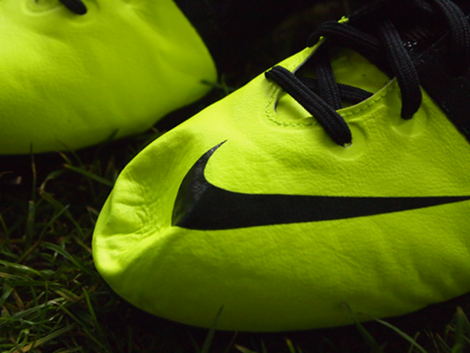 If anyone had any doubts that the environmentally-preferred Kangalite might not be as soft as the ‘vanilla’ version, then you can cast them out straight away.

As you can see from the picture, the Nike GS’s upper is practically soft enough to leave your thumbprint in. This is the first time we’ve been able to see Kangalite without the CTR360’s control pods or the Laser IV’s adaptive shield, and really gives you an appreciation for what a great job Nike have done in making their synthetic soft, thin and flexible. 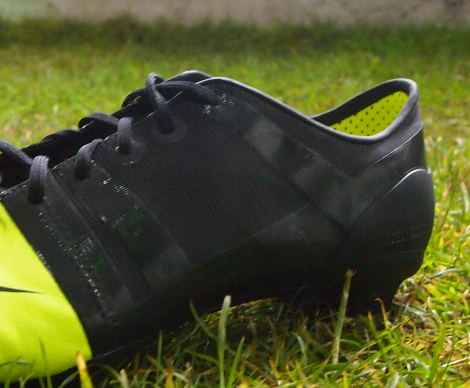 The material used in the midfoot of the Nike GS is 95% composed of material from recycled plastic bottles – which you might think would leave it feeling awkward and rigid.

And whilst there was a slightly rigid feel at first, there’s plenty of give once they’ve ‘warmed up’ a bit. If we had to compare it to any boot, we’d say it’s similar in flexibility to the microfibre canvas on the Puma v1.06 & v1.08, but has more of a ‘woven’ feel to it, rather than the square panels of the Pumas. 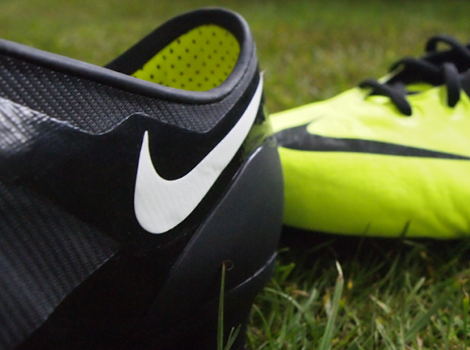 For something that used to be castor oil at some point in it’s life, the Nike GS is definitely solid! Despite the the recycled concept of the boot, the asymmetrical heel counter is as solid as any you’d find on any other boot in the world and probably the biggest testament to Nike’s concept of taking reclaimed materials and making a boot as good as any other in the world. 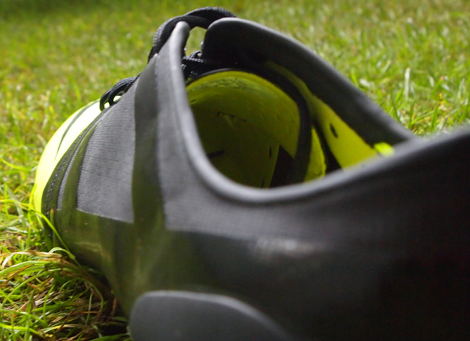 Whilst the rest of the Nike GS boasts a striking, futuristic aesthetic, the inside of the boot is where you see it for the ‘concept’ boot that it truly is.

Nike have left in no luxuries in their quest to create their lightest boot ever, with the inside of the quarter looking very ‘raw’, leaving the GreenSpeed’s multi-layer construction exposed, with no plush lining to cushion the feet.

The sockliner itself is pure white, and made of a soy derivative. 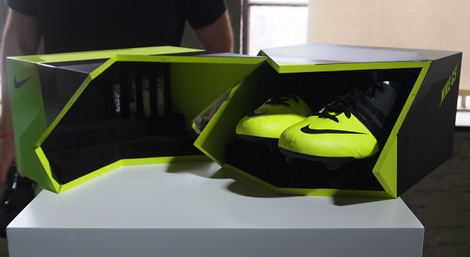 Fortunately, we were able to get a little look around the presentation box that Nike have been showing off the GS in.

The limited edition retail GreenSpeeds will ship in an environmentally-friendly recycled cardboard shoebox with a special message about Nike’s commitment to it’s ‘Better World’ initiative printed on the inside, but Nike’s own pair  have travelled the globe in this special container.

As well as looking the absolute business, the Nike GS Presentation Box does more than just carry the shoes. 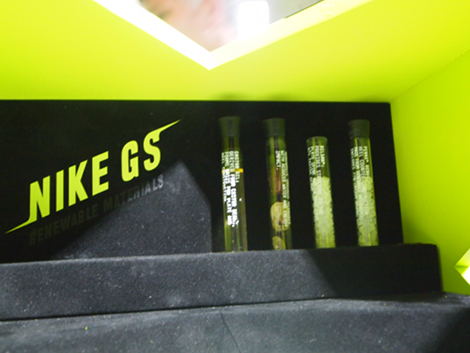 Inside, you’ll find test tubes containing each of the ‘base’ components of the GS; Castor oil, palm oil and the two varieties of reclaimed plastic that go into making these boots.

Are you lucky enough to have a pair in the post?

Would you like to see Nike take the ‘GS’ line full time? Or maybe you’d like to see an eco-friendly ‘CTR GC – GreenControl’?

Don’t forget, if you’re in the UK the final pairs are on sale now at Niketown London or the Manchester Football Store!