Here on our next All time Greatest XI, we look at the best of the Nike Sponsored players ever to take to the pitch.

For anyone that saw yesterday’s adidas team, you’ll notice the youthful look of the Nike squad. Whereas adidas are steeped in nearly a century of sporting greatness, Nike have only been producing football boots' for a comparitivly short 20 years.

Despite the relatively young look of the team, we’ve lined Nike’s greatest up in a classc 4-4-2 and have shuffled a player or two slightly out of position (sorry Carlos!) But we’re hoping you’ll agree (or improve upon) our idea that these are the great 11 players ever to wear the swoosh of Nike upon their football boots. 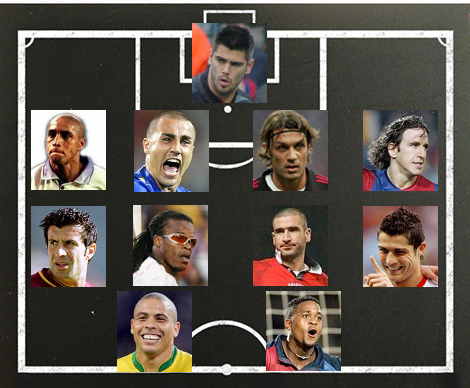 Nike haven’t sponsored many goalkeepers, and certainly none that are revered as ‘greats’ just yet; but there’s no doubt that Barcelona’s Victor Valdes is well on upon his way to achieving that status.

Whilst internationally he’ll be known for playing second chair to Iker Casillas in Spain’s goal – Valdes will be known as the most succesful goalkeeper Barcelona have ever had – which is no mean feat when you consider the history of the BlauGrana.

Lauded as one of the most complete wing-backs ever to play the game, Roberto Carlos’ tireless perforances for Club and country earned him 3 UEFA Champions Leagues and with World Cup with the Galacticos of Real Madrid and Brazil respectively.

But it was Carlos’ set-piece abilities that really helped put Nike’s football boots' on the map – The Brazilian’s free-kicks a serious force to be reckoned with on every level of the game, with scientists writing weighty papers' attempting to explain his technique (really!).

One of the greatest readers of the game ever to set foot on the field, Fabio Cannovaro is widely regarded as one of the best man-markers of the modern era.

A powerful player needs a powerful boot, and that˘ why Cannovaro has always been a Total 90 player Ĺ›wearing the AZT90 Supremecy as he captained his side to World Cup glory

The immortal Paolo Maldini played in 25 different seasons for the Rossenri, amassing an inconceieveable 902 appearences in the famous Red and Black.

Maldini has racked up 7 scudettos to his name and 5 European Cups/Champions Leagues. His defensive prowess has also earnt him a place in 2 World Cup all-star teams and 3 UEFA European Championships teams of the tournament.

The Lion, Carlos Puyol has served Barcelona loyally with passion and conviction.

Playing in his Nike Tiempo Legend football boots, Barcelona has rewarded Puyol with honour after honour, including the legendary quadruple in 2009, the only thing most fans can complain about is his firey temper on the pitch.

As long as it stems from his passion for the team, that˘ no bad thing by us!

2001' World Player of the Year Luis Figo is the most' internationally capped player in Portugal’s history, and one of the few to have played for both Real Madrid and Barcelona in this pomp.

Never a Prolific goalscorer, Figo was known for his power and flair in a' variety of positions – famously playing in the original AZ Total 90' ' football boots.

We’ve shifted The King himself back from is usual forward role into a more influential attacking midfield, Eric Cantona was part of the incredible Manchester United team that won two league and cup doubles as well as two more Premier League titles.

Spending nearly his entire career in Nike football boots, Cantona’s obligation to the big swoosh didn’t end at retirement – as the Frenchman continued to star in some of Nike’s most memorable advertising campgains including The Cage and a' cameo inn the samba-tastic Airport ’98.'

Always a bone of contention among fans and players alike, there are few players that divide opinion like Cristiano Ronaldo.

Currently playing in his Mercurial Vapor CR Safari Superfly football boots and valued at 100m, there˘ no disputing the raw talent in Cristiano Ronaldo, it˘ how he chooses to use it over the next few years that will define his legacy as a ‹Ĺ›great˘€žË of the game.

Mr Mercurial himself is single-handedly responsible for inspiring today˘ deadly breed of striker.

Blending pace, power and crowd pleasing skills and tricks, there˘ simply noone better to lead our Nike XI˘ front line.

All-time highest scorer for the Dutch National team, Patrick Kluivert posessed an extraordinary first touch for such a big player.

Something of a journeyman, Kluivert has been able to ply his trade in some of the biggest leagues in the World, racking up 200 club career goals in 468 games.

We’ve had the toughest time picking out just' 11' Nike football boots' wearing greats; who would you have included in your great XI?